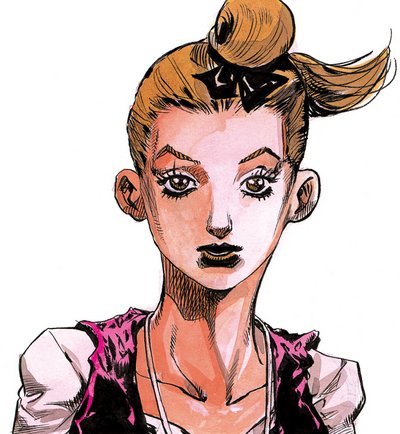 Interpreter at the Louvre

Body explodes after inflating with water

She is an interpreter who works at the publishing department of the Louvre, who welcomes Rohan Kishibe to the museum. After receiving Rohan's request to see the Under the Moon painting, she accompanies him along with Gaucher and two firefighters to see it as well.

Noguchi is a slender woman of average height. She has blonde hair combed into a loose top knot tied with a bow tie. Her outfit consists of a dark sleeveless vest with pink highlights on top of a light pink blouse along with yellow tights covered in holes and plain black shoes.

The series is known for alternating colors between media, the information presented below may or may not be canon.
Skin(Fair, brown lipstick)
Hair(Blonde)
Eyes(Dark brown)
Outfit
(Black/pink vest, light pink blouse, yellow tights, black shoes) 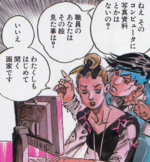 Noguchi is a polite person, maintaining her composure even though Rohan is persistent to see the painting. She provides him with good customer service to Rohan by calling Gaucher, the curator of the Asian Arts department, to get proper authorization in order to fulfill his request.

She has been suffering greatly ever since her son Pierre drowned in a lake, as she blames herself for his death. After witnessing his ghost from the painting, she breaks down and asks for forgiveness, losing all sense of danger despite seeing Gaucher and the two firefighters die before her.[1]

Noguchi was the mother of a boy named Pierre. One day, she left him alone for a moment close to a lake in a park to take her things out of the car, but in the meantime he had fallen in the lake and drowned. After finding his body, she put all the blame on herself for his death. 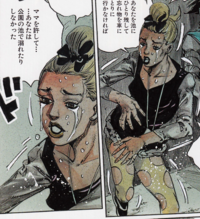 Noguchi is introduced as the interpreter in charge of Japanese translations at the Louvre. She greets Rohan when he visits the museum and looks through the museum's archives to find the painting he's searching for, "Under the Moon". She finds that it is being stored in an abandoned warehouse called Z-13. Rohan asks to see it, but is only given permission if accompanied by her, Gaucher and two firefighters.

When the group finally finds the painting, they each start to die after recognizing someone in the dark. It turns out that the painting was making ghosts out of their memories and killing the group the same way these ghosts died. Noguchi tries to run, but is surrounded on all sides and sees the ghost of Pierre. She breaks down and apologizes to her son, emotionally unstable. Rohan's pleas for her to get away from the ghosts are in vain, as Pierre inflates her body with water, popping her. Even in her last moments, she is grateful to see her beloved son for one last time. Her body is never found and she is considered since then as missing.[1]