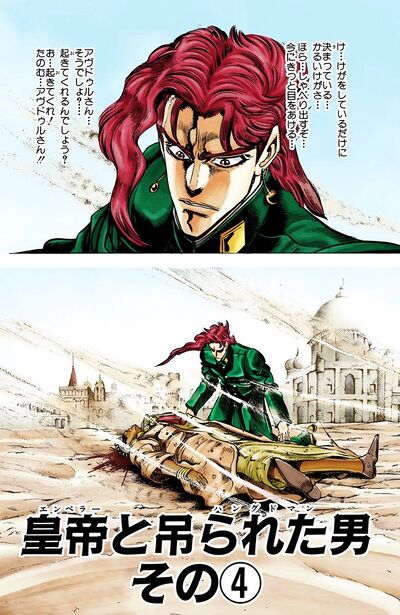 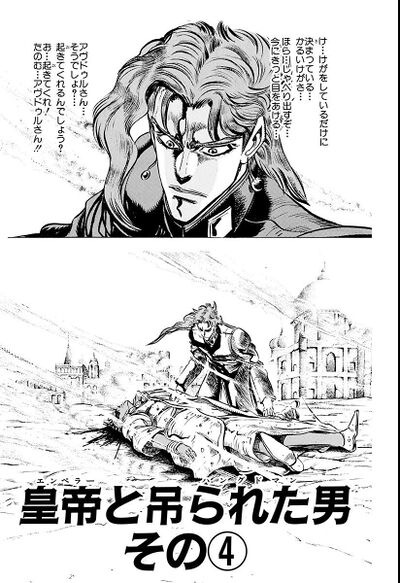 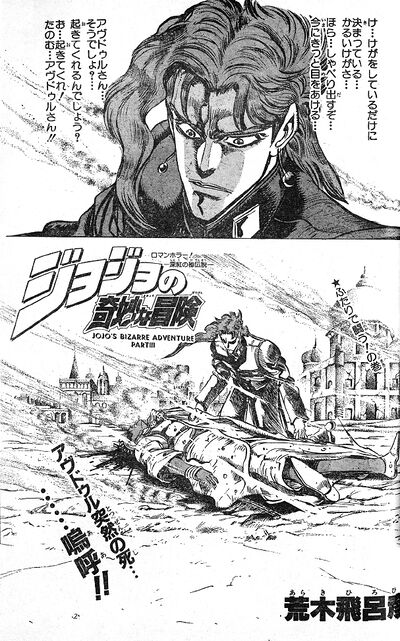 Emperor and Hanged Man, Part 4 (と その④, Enperā to Hangudo Man Sono 4), originally We Fight Together! (ふたりで闘う！, Futari de Tatakau!) in the WSJ release, is the thirtieth chapter of Stardust Crusaders and the one hundred forty-third chapter of the JoJo's Bizarre Adventure manga.

Kakyoin hopes that Avdol's wound is not fatal, wanting to believe he's about to say something or get up. However, Avdol's body shows no reaction. Polnareff approaches Hol Horse, but is warned by Kakyoin that this was something Avdol was against. Even though he's reluctant, Polnareff agrees to get away with Kakyoin in a nearby truck, but he sees Hanged Man inside another mirror. The Stand taunts Polnareff by telling him that he will soon join Avdol and Sherry in hell. While Polnareff is busy breaking the mirror out of anger, Hol Horse shoots him with Emperor, but everyone is taken by surprise when Hierophant Green conducts an Emerald Splash that's directed at Polnareff. Kakyoin attacked his ally to move him out of the way of their enemies' combined attack.

Kakyoin jumps into the jeep, pulls Polnareff in, and drives away, out of Emperor's range. J. Geil decides to go after the heroes. Polnareff tells Kakyoin he finally understands what Avdol was trying to tell him, and Kakyoin elbows him in the face in place of a handshake. He then tells Polnareff that they are going to fight together.