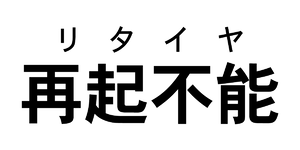 When an antagonist is retired (, Ritaiya, lit. "Out of Commission"), it means that they have been defeated and rendered inoffensive to the heroes for an indefinite period of time, regardless of their health and situation. In some cases, their status is unknown.

The following is a comprehensive list of the retired characters from Battle Tendency through JoJolion, as well as JoJo-related media. It does not include characters who have been explicitly killed or characters who turn a new leaf and/or join the heroes in their quests during their corresponding parts.