A summary of Giorno Giovanna's history and movesets in video games.

Giorno appears as both a support and help Koma-character, and is also the only representative character from Part 5 to appear in the game.

His supports use Gold Experience (2-Koma) or Gold Experience Requiem (3-Koma) to attack with his "MUDAMUDAMUDA!!!" and his help Koma boosts the special attack gauge recovery when blocking or attacking with a support character.

He's one of the 3 characters who serves as an ally boost to DIO (along with Jonathan and Taizou from Taizou Mote King manga series).

Giorno was one of the characters first confirmed during the game's announcement. 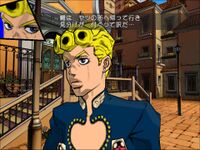 Giorno's appearance in the PS2 videogame

Giorno makes his playable debut with the rest of Team Bucciarati is one of the main playable characters in the game, being voiced by Romi Park.

He can use his Stand, Gold Experience, to create life and use it to his favor. In an example of the use of his Stand, he can create roots to capture the enemy and give himself a chance to attack. Gold Experience can also create trees to inflict considerable damage, and transform one of Giorno's brooches into a frog, that deflects enemy damage back at them, or a ladybug which follows the enemy (A useless ability added in for comical effect and loyalty to the manga). Giorno's main Stand attack is his "MUDAMUDAMUDA!!!" series of punches (which can be charged to extend the punches' duration).

In all chapter where Giorno is playable (and all the missions in Another Story) aside from the final chapter, he has Gold Experience; In the final battle, he has Gold Experience Requiem. G.E.Requiem possesses most of Golden Experience's attacks, but instead of using its ability to create life, G.E.Requiem will shoot scorpions from its finger not unlike firing bullets as a longed ranged attack. G.E.R can also counter Diavolo's King Crimson's ability: When Diavolo erases time and GER's ability is activated Giorno will stay slowed in the erased time, while G.E.R can freely move and attack Diavolo.

Giorno appears as one of the playable characters in the game. He is voiced by Daisuke Namikawa this time around, with his previous seiyuu, Romi Park, instead voicing Koichi Hirose. He was confirmed for the game alongside Mista, Polnareff and Kakyoin.

Along with Enrico Pucci, Kosaku-Kira, Johnny Joestar, Hol Horse, and Koichi Hirose, Giorno is a character who can utilize more than one Stand during a match as part of his moveset. As one of the mass majority of playable characters in the game with the "Stand" Style, Giorno can turn Gold Experience on/off, changing movesets, as well as having access to the Stand Rush ability returning from the Capcom game, being able to attack in conjunction with his Stand.

While Gold Experience is off:

While Gold Experience is on:

Giorno's HHA, "Savor the taste of pain!", is a slow-motion punch to the face from Gold Experience that sends the opponent flying across the stage and leaving them unable to act for a moment afterward on landing (taken from his first encounter with Bucciarati). The HHA will have a different effect depending on the character (such as Gold Experience jabbing its thumb in Jonathan's eye like Dio has, or punching DIO in the upper head like Star Platinum has).

Giorno's GHA, "Your 'end' has no ending!", has him take the Arrow and stab Gold Experience with it in order to evolve it into Gold Experience Requiem, requiring roughly 3 seconds of animation to play uninterrupted. However, Requiem Mode only lasts until the Heart Heat Gauge empties; GER will revert to Gold Experience once it runs out. During this mode, Giorno's moveset changes completely, and he cannot turn GER off. Giorno's singular normal attacks do considerable amounts more damage and Puttsun Cancels now spend a fifth of a bar of the Heart Heat Gauge instead of the usual whole stock.

Naturally, Diavolo's "Erasing Time" skill is automatically nullified in Requiem Mode; The ability will initiate as the confirming sound plays, but the time erasure does not actually take effect. If Requiem Mode is active while Enrico Pucci is in "Made in Heaven Mode", the slowdown effect on Giorno will be nullified due to GER's powers, making him one of the only two characters who can truly counter Made in Heaven's effects, the other being "Kosaku Kawajiri's" Bites the Dust.

Alongside the rest of the playable members of Team Bucciarati (sans Narancia) and Ermes Costello, Giorno is one of the only characters who activate Resolve Mode instead of the normal Rumble Mode when low on health. In this state, attacks that do not result in hard knockdowns or blow-backs no longer phase the character. Resolve Mode is also activated as a passive effect during Requiem Mode, regardless of health level.

Besides the entire cast from Part 5, Giorno possesses special dialogue before a fight with DIO or Koichi. When fighting Koichi, Koichi will demand his suitcase and passport back (recreating their encounters during early Part 5). While fighting DIO, Giorno admits that DIO was the person he wanted to meet most, and DIO does not recognize him. If Giorno wins, he will say that he will use the power he inherited from him for his own dreams. If DIO wins, he will admit to liking Giorno.

Giorno Giovanna was confirmed for the game alongside Mista, Fugo and Narancia.

Since most of the game's animation, effects and attacks were reused from All Star Battle, Giorno's repertoire of abilities remains mostly the same, though with some new additions to aid him in battle.

As a Stand User, Giorno is one of many characters with wildly varied abilities that grant him uniqueness in battle.

Giorno interacts with stage objects not by breaking them or picking them up, but by transforming them into small creatures. Depending on the size of the object in question, it can either be transformed into a flying fish that flies towards the nearest opponent to attack them, or a hidden snake that bites and inflicts Poison on opponents whom attempt to interact with it.

While Gold Experience Requiem is active, Giorno's movement speed receives an incredible boost, and his moveset changes completely. All Normal and Powerful attacks start in the air, with the two taking flight and covering a considerable distance with each attack. Giorno is also able to see and attack Diavolo while time is being erased via his "All movement is useless now!" Style Action. GER is still not permanent, however, and Gold Experience will revert to its original form after some time.

Giorno can only participate in Special DHAs while Gold Experience is in its base form.

He is paired with Mista in the Eyes of Heaven Tournament, defeating Rohan Kishibe and Polnareff in the first round, and "Kosaku Kawajiri" and Weather Report in the second. In the semifinals, they are defeated by Bucciarati and Trish in the first round.

Replaces Panels in a vertical line with Giorno panels

Replaces panels in a vertical line with Giorno panels

Resolve to Open a Path

Erases all connected panels. The skill will activate again if you connect a certain number of Giorno panels. In the end, places as many enhanced Block panels per times the skill was activated. The Skill Gauge increase during the activation is 0.75

Skill: If you control the arrow, everything will end!

Enhances panels in the middle. For every six partner panels, the enhancing range is increased. The maximum number of panels enhanced depends on the Skill Lv.

Skill: We don't know unless we try!