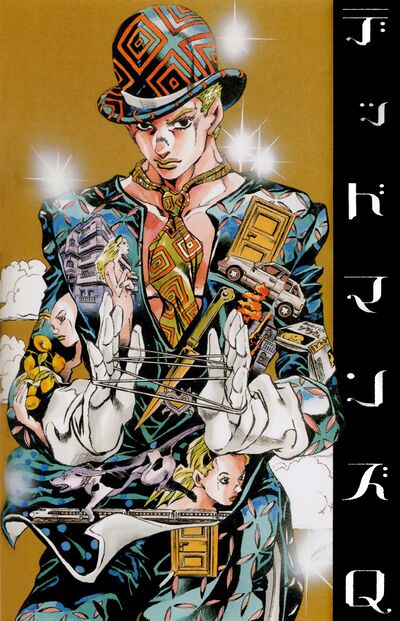 Deadman's Questions (デッドマンズ, Deddomanzu Kuesuchonzu) is a short story manga written and illustrated by Hirohiko Araki; originally published in Shueisha's Manga Allman magazine from June 16 - July 21, 1999 (Issues #12-14). It was later compiled with Araki's other stories in Under Execution Under Jailbreak.

The story follows the day-to-day life of a vagabond spirit trying to find happiness by performing assassination requests.

The protagonist is described as a vagabond spirit who is unaware of his life when he was alive. As a Ghost trapped in the living world after his death, he works for a monk, doing the "dirty work" of killing targets she gives him in exchange for money. He believes that, by making this job his purpose to live, he might find happiness. For one of his contracts, he is sent to kill an on-the-run child murderer hiding out in an apartment with his significant other. After a convoluted attempt to enter the apartment due to the rules of being a ghost, the target is eliminated, at which point the protagonist reveals his name to be Yoshikage Kira.

On another mission, he is sent to a soldier's mansion that turned into a spirit to find out the reason behind the deaths of people around the area. He is surprised to see even objects can become spirits and wishes to live in the mansion, as he can not only manipulate objects, but feel them, as they are spirits just like him. Enthusiastic and finally finding happiness, Kira investigates the entire mansion, including the various spiritual books, CDs and fire within it. He comes across many suspicious-looking eggs and touches some of them. The eggs crack open and releases creatures revealed to be Spirit Cleansers. One of them enters inside Kira's arm and begins to eat him from the inside, forcing him to cut his arm off as the creature climbs through his entire body. Kira then comes to the conclusion that they are cleansers of spirits and the mansion was a nest of its eggs. Chased by the cleansers, Kira manages to find a ghost firearm and is able to kill the creatures. Kira escapes the mansion and goes to investigate the information the monk gave him, stating that if he found any errors, he would make sure she finds out the credibility of the nether realm personally. He then wonders if her arm would stick in place of his lost one.

Even so, when I got to the scene where he discovers that he’ll no longer have any way of listening to his favorite music, I got a little teary-eyed.
”
—Hirohiko Araki
“
『デッドマンズQ』