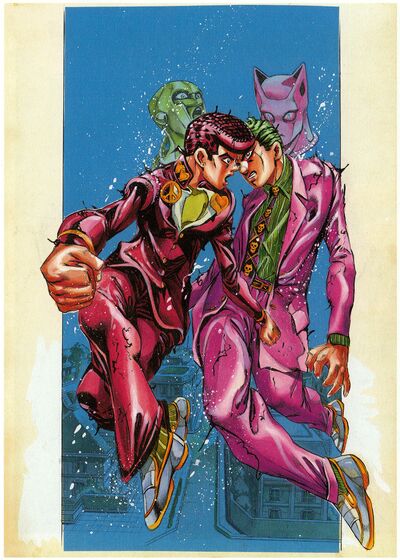 Kira, unwilling to accept defeat, is pummeled out into the neighborhood sidewalk. Kira seemingly escapes by using Bites the Dust once more.[3] However, he finds himself in the Ghost Girl's Alley, where Reimi forces him to remember his death: after being foiled by Koichi and Jotaro,[4] he was subsequently run over by an ambulance. Recalling the advice his father gave him, Kira attempts to exact revenge on Reimi by forcing her to turn around. However, Arnold rips off Kira's hand with his jaws, causing him to fall from the impact and consequently look behind himself. A multitude of disembodied hands swarm Kira, breaking him apart as they drag him into the afterlife.[5]

Back in Morioh, the town's citizens gather together to say goodbye to Reimi and Arnold as they ascend to Heaven. Meanwhile, Hayato waits with his mother for his father's return, knowing he can never come back. Narrating once more, Koichi wonders whether the wounds Kira left on Morioh will heal, or whether they will prove fatal to the town's future.

As Joseph and Jotaro depart Morioh on a yacht, Joseph reassures his grandson that the youths of Morioh have a golden heart and a sense of unwavering justice that will ensure the town's safety for generations to come. Josuke arrives at the dock to say goodbye to Jotaro and his father (while stealing the latter's wallet). As Joseph fumes, Josuke says goodbye to the duo while striking a pose. Thus, the summer of 1999 comes to a close; for most, it was a summer just like any other.[6]