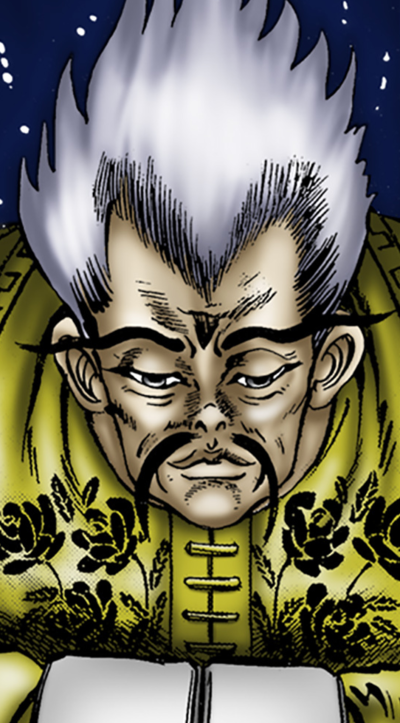 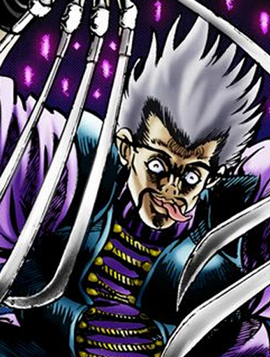 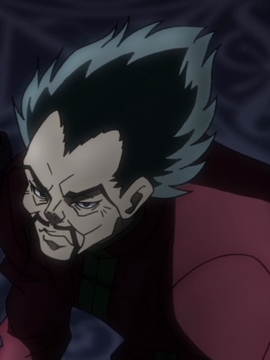 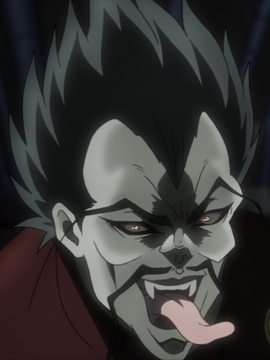 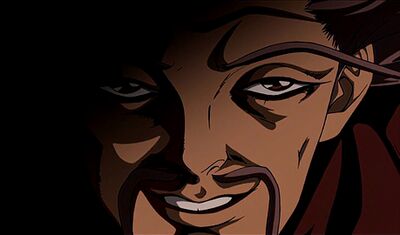 Heritage for the Future
“
He... won't be caught here... So says his fortune... Not only those three moles on his ear, but the attributes of his face. He is born with impenetrable luck! (あの男…つかまりやせんよ…占いでそう出てるんじゃ…耳の３つのホクロだけじゃあなく、あいつの顔の相もそうなっているんじゃ 奴は急運のもとに生まれついとる！Ano otoko... tsukamariyasen yo... Uranai de sō de teru n ja... Mimi no 3ttsu no hokuro dake jā naku, aitsu no kao no sō mo sō natte iru n ja. Yatsu wa kyū un no moto ni umaretsui toru!)
”
—Wang Chan, Chapter 11: The Stone Mask, Part 4

Originally a black market merchant in the slums of London, he becomes a faithful servant of Dio Brando after being transformed into a zombie. 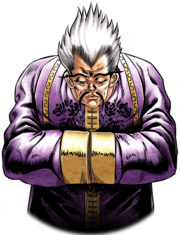 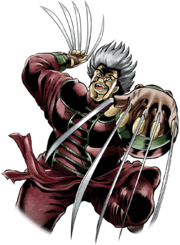 Wang Chan is a short, scrawny, elderly Chinese man. His hair is spiky and firmly stands upwards. Along with a prominent widow's peak, he has very long eyebrows, a small mole under his right eye, and a fu manchu mustache. After becoming a zombie, he grows fangs and a long tongue.

As a human, Wang Chan shows a nasty and greedy personality, selling poison to Dio for fun without any regard for its use.[2] He also doesn't mind violence, smiling when Dio stabs George Joestar. Later, he heads back to the Joestar Mansion after it burns to the ground to salvage the Stone Mask in order to sell it for a profit.[3]

Upon becoming a zombie, however, Wang Chan becomes entirely devoted to Dio's wishes. At first very quiet, the zombified Wang Chan becomes more brutal and cruel, becoming unrestrained in expressing his urges. Notably, he recklessly attacks a fatally wounded Jonathan, underestimating him despite Dio's warnings. Despite his recklessness, Dio trusts him enough to be responsible for taking care of his head and implanting it onto Jonathan's body.

Being versed in the art of fortunetelling, Wang Chan is supremely confident in his predictions, knowing that Dio would escape imprisonment at the Joestar mansion.

As a human, Wang Chan was a fortune teller and an expert on Oriental poisons. He successfully predicted that Dio would have great luck in his life, which proved to be true in his many near-death experiences.

After being zombified, he appears to have retained his personality, though he shows a more bloodthirsty side and selflessly serves Dio. In terms of physical ability, he can jump great distances much like one trained in martial arts. However, as one of the shorter zombies in Dio's army, he usually takes to running away or hiding in self-defense unless directly told by Dio to attack. Wang Chan is shown to be capable of fighting one-handed while holding Dio's head with the other.

Debut: Chapter 20: Jack the Ripper and Zeppeli the Strange, Part 3 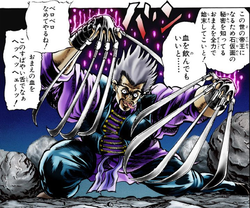 In battle, Wang Chan chooses to wear gloves with long claws to increase his power and attack range. He is confident in his ability to kill a human by a single swipe of his rigid claws, though he still needs to attack from a relatively-close distance.[4] This is omitted in the anime.
Dio's Head 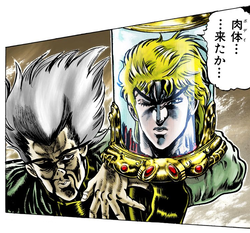 After Dio loses his body, Wang Chan holds Dio's head in a jar during his final battle with Jonathan. Wang Chan can turn the jar to fixate Dio's vision, allowing the vampire to use his Space Ripper Stingy Eyes.[5]

Wang Chan was a shop owner operating in Ogre Street, the most dangerous part of London. When a young Dio Brando came to buy slow-acting poison from him to kill his father Dario Brando, he was unconcerned by Dio's evilness and told him of a man in his own land who had a similar birthmark to Dio's. The man in question had a harsh life, but lived to be over 183 years old.[2]

Years later in 1880, Dio reuses the same poison to murder George Joestar. However, Jonathan discovers Dio's schemes and, with the help of Robert E. O. Speedwagon, manages to find Wang Chan's shop. Wang Chan is arrested by the police and taken to the Joestar Mansion. As he witnesses Jonathan approaching Dio to cuff him, Wang Chan claims that Dio is far too lucky to have fully given up this early. Dio uses George's blood to become a vampire, and Wang Chan manages to escape during the chaos. After the mansion burns down, Wang Chan searches the ashes, attempting to find the Stone Mask in order to sell it. Instead, he discovers a heavily-injured Dio, who sucks his blood and turns him into a zombie.[6] From that point on, Wang Chan serves as Dio's subordinate.

Wang Chan takes care of Dio while he is recovering from his injuries, showing great loyalty to him. He is seen pushing Dio in a wheelchair during their meeting with Jack the Ripper.[7] He attacks Jonathan during his training, but Jonathan's Zoom Punch introduces him to Ripple energy. Wang Chan escapes and later informs Dio about the Ripple.[4] When Jonathan's group reaches Dio's mansion, Wang Chan remains hidden and manages to survive the battle. He finds Dio's head after the battle and, lamenting that Dio doesn't have another body, steals a fisherman's boat and escapes.[8]

Wang Chan stows away on the ship Jonathan and Erina board for their honeymoon. After being spotted by Jonathan, he retrieves Dio's head from his coffin. Dio fires Space Ripper Stingy Eyes at Jonathan, piercing his neck and rendering him unable to create Ripple energy. However, Jonathan uses the last of his energy to crush Wang Chan's head and send Ripple into his body. Wang Chan's headless body is sent flying into the ship's machinery, and the Ripple controlling his carcass disrupts the ship's screw shaft; it is presumably destroyed in the ensuing explosion.[5]

Yusuke Sasaki, game producer for the Phantom Blood PS2 game, thought Wang Chan wouldn't be a good final boss if he remained completely accurate to the story. However, he didn't want to completely stray away from JoJo's story, so Araki gave him various ideas.[9]

Heritage for the Future (Arcade/PS1/DC)

Wang Chan appears as the "child" version of Shadow DIO when attacked by Alessi's Stand. If Shadow DIO is caught in Alessi's Stand's attack, he turns into Wang Chan holding the jar containing Dio's severed head. In this state, Wang Chan can attack by using his claws, or Dio's head can attack using Space Ripper Stingy Eyes. 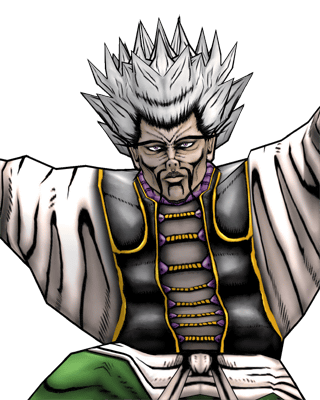 Wang Chan appears in Chapter 08 as the first enemy Jonathan faces after learning the Ripple. Much like in the original story, Wang Chan uses his giant claws to attack and poison his opponent. Wang Chan is also playable in some battles in Extra Battle Mode, and can be used in 77 Rings Knights Mode.
Wang Chan
Commands
Name
Japanese 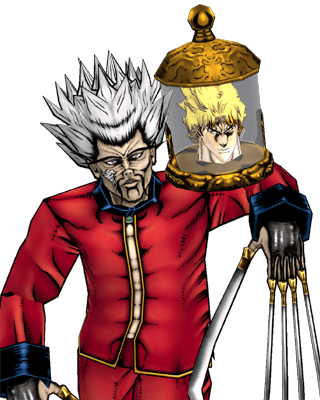 Wang Chan also appears in the regular Chapter 23, carrying Dio's head in a large jar. Although Wang Chan retains some of his claw-based attacks, his moveset is primarily based around Dio's Space Ripper Stingy Eyes attack. This version of Wang Chan is playable in the last stage of Dio Mode, and can also be unlocked in 77 Rings Knights Mode.
Wang Chan w/ Dio
Commands
Name
Japanese

Wang Chan appears in the PS3 game as a navigation character for the GALLERY MODE STORE.

Wang Chan appears in Diamond Records as a playable character in both the Action Battle and Tactical Battle game modes. He has one 'Fighting Spirit' type 5 star statue. Wang Chan's moveset in both game modes is comprised of various attacks inspired by the anime, including zombie minion summoning as well as using the severed head of Dio in a jar. Even though Diamond Records is a game based on the anime, Wang Chan also attacks with his claws only seen in the manga. Despite being a zombie in canon, the game gives him the "vampire" tag and thus gives him the qualities of a vampire character (such as regeneration and weakness to the Ripple). Playing as him will force any outdoor stages into their night time variants.
Moveset

Wang Chan's basic attack string is a combination of up to five various attacks comprising of different strikes with his claws. In Tactical Battle, this is cut down to only three hits.

Wang Chan jumps into the air to kick the opponent.

Wang Chan lunges forward and performs a strong strike with one of his claws. (Unlockable)

Wang Chan summons a zombie to throw a life preserver at the opponent. In Tactical Battle, it also gives Wang Chan a temporary speed buff.

Wang Chan summons a zombie to swing an axe at the opponent in one strong motion. (Unlockable)

In the cutscene, Wang Chan reveals a jar containing Dio in his disembodied form. Dio uses his Space Ripper Stingy Eyes from inside the jar, as Wang Chan rotates his body to allow the beam to cover more of the area. In Tactical Battle, it hits all opponents present on the stage.