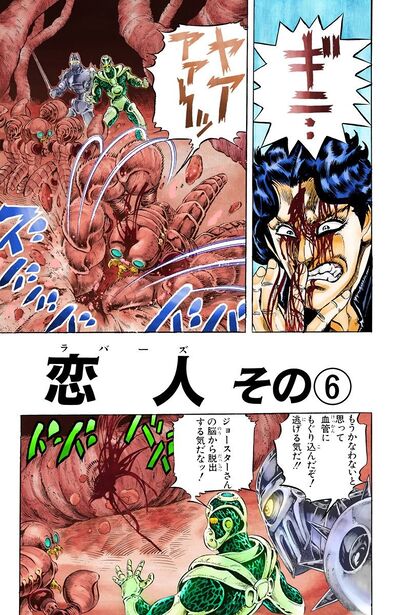 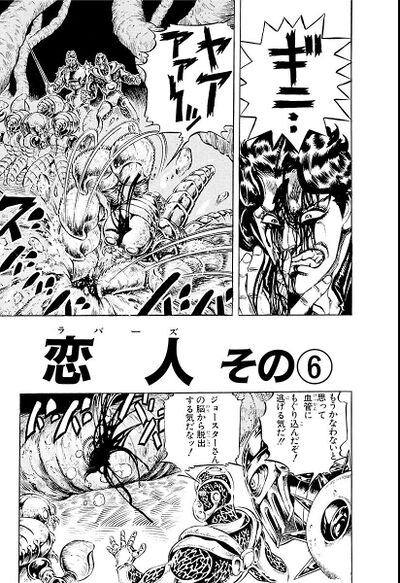 Lovers, Part 6 ( その⑥, Rabāzu Sono 6), originally Receipt Paid in Full (つけの領収証, Tsuke no Ryōshūshō) in the WSJ release, is the fifty-second chapter of Stardust Crusaders and the one hundred sixty-fifth chapter of the JoJo's Bizarre Adventure manga.

Lovers tries to escape from Joseph's brain, planning to return to Steely Dan and Jotaro. Steely Dan buys time by begging Jotaro and licking his boots, but, as Lovers is about to enter Jotaro's ear, Star Platinum catches it between two fingers. Crushing it to the point where Steely Dan's arms and legs break, Jotaro seems to think that this enemy doesn't represent a threat anymore, starting to turn his back and walk away, releasing the little Stand as he threatens Steel Dan to never attack Jotaro and company again.

Steely Dan stops him, revealing that Lovers has already infiltrated a little girl's brain. He threatens to kill her if Jotaro tries to defend himself while he goes to stab him in the back. Suddenly, Steely Dan finds that he can't move anymore, and Jotaro mocks him by turning his own knife against his face, piercing his cheek as he screams. Jotaro explains that Hierophant Green had fixed a tentacle on Lovers' foot, allowing Kakyoin to tie him up entirely. Steely Dan tries to beg again, offering the money DIO gave him, but Jotaro says that money can't pay for what he owes him. Jotaro gives Steely Dan the lesson of his life: Star Platinum brutally pummeling him for three pages and sending him through a wall. Afterward, Jotaro gives him "his receipt", and walks away.