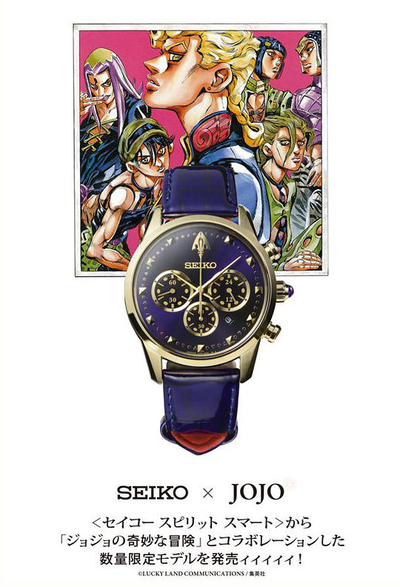 In April 2013, Seiko released a series of 7 watches based on the main characters from Part 5 of JoJo, including Giorno, Bucciarati, Mista, Trish, Narancia, Fugo and Abbacchio. Each watch featured a distinctive design meant to represent each character and their Stand. For example, Mista's watch is missing the number 4. On the back of each watch is an engraving of Coco Jumbo. The watches were modelled on the "Seiko Spirit Smart" line of watches and were limited to 300 units per model, with a price of ¥42,000.[1][2]

On November 22, 2019, Seiko released another set of watches based the JoJo's Bizarre Adventure: Golden Wind TV anime. A total of eight were made, based on the characters Giorno, Bucciarati, Abbacchio, Mista, Narancia, Fugo, Trish and Diavolo. The watches were modelled on the "Seiko 5 Sports" line of watches and were limited to 1000 units per model, with a price of ¥51,700.[3]