The JOJO L-02K (ブイサーティー プラス エルゼロイチケー) is a limited edition Android smartphone/tablet computer hybrid ("phablet") that was released on March 23, 2018 in celebration of JoJo's Bizarre Adventure's 30th Anniversary. As part of NTT DoCoMo's LG V series, the phone featured a casing and promotional artwork designed by Hirohiko Araki. Only 10,000 units were released.

The JOJO L-02K is pre-loaded with dynamic wallpapers and icons that span from Phantom Blood to JoJolion. Its alert noises are also based on sound effects from the series like Star Platinum's battle cries. Other features include a Steel Ball Run pedometer, a built-in JoJo quotes dictionary, a JoJo manga editor, and a "Stand Vision" mode that allows a Stand to appear next to a person when taking a picture.[1] 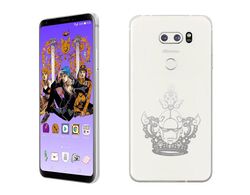