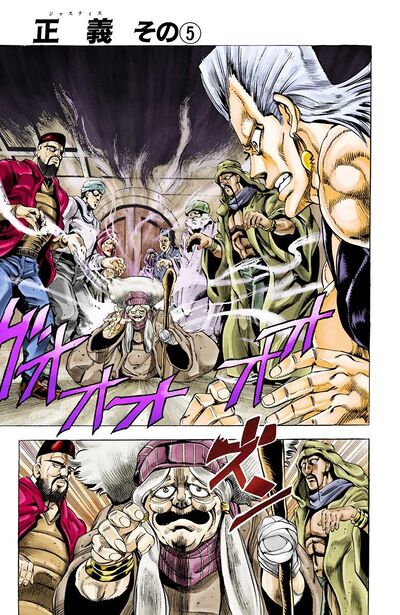 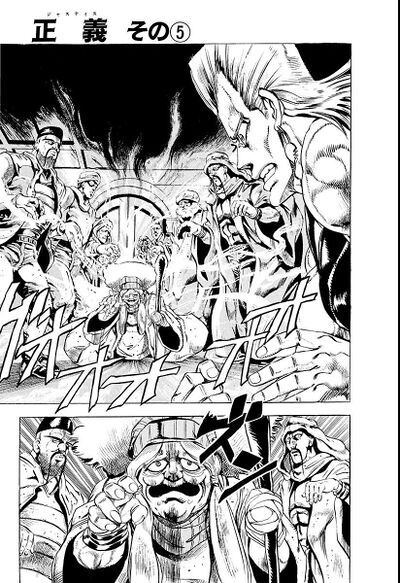 Justice, Part 5 ( その⑤, Jasutisu Sono 5), originally Lick It Till It's Clean (なめるようにきれいに, Nameru Yō ni Kirei ni) in the WSJ release, is the forty-fifth chapter of Stardust Crusaders and the one hundred fifty-eighth chapter of the JoJo's Bizarre Adventure manga.

Surrounded by corpses controlled by Justice, Polnareff runs away. Enya keeps up with his speed despite being an old woman, so he locks himself into a bathroom to escape her. As Polnareff wonders why he's always attacked in bathrooms, Enya orders the corpses to smash the door open. Polnareff intends to remain there because he can't fight all of them without getting injured, but the noises from the outside suddenly stop. When Polnareff peers into the keyhole, he meets the eye of one of the corpses. The corpse uses this opportunity to slash Polnareff's tongue with his own sharp tongue, and Justice uses the wound to control him. He is forced to open the door and to lick the toilet clean.

Jotaro suddenly enters the room, but Enya manages to hide all of the corpses as well as Polnareff inside the bathroom.