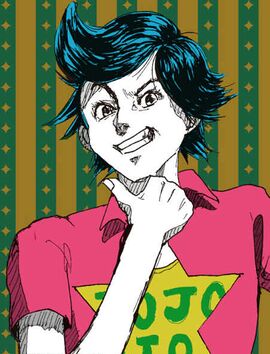 JORGE JOESTAR Chapter 2: Nishi Akatsuki
“
Even if I put things together after the fact, as long as I get there in the end, what does it matter? If I stopped to ponder every mystery I saw before collecting all the information I needed, I'd never solve anything.
”
—Jorge Joestar, JORGE JOESTAR Chapter 12: Rhinoceros Beetle

Jorge Joestar (城字・ジョースター, Jōji Jōsutā) is the main protagonist of the even numbered chapters in the light novel JORGE JOESTAR.

Jorge is a 15-year old detective living in Fukui Prefecture, Japan, in the 37th iteration of the universe. He is of Japanese descent, but was adopted by the British Joestar Family and raised English.

As a high school detective, Jorge solves several unique cases. He ends up going to Morioh to solve a murder mystery, eventually leading him into a bizarre journey through space and into different universes.

Jorge is a teenage boy of average height and build. He has a wavy wings hairstyle

with high volume bangs that are pointed upwards. He wears a collared t-shirt, shorts, and a belt. The center of his t-shirt has a star with a repeated "JOJO" pattern inside it. Some illustrations of Jorge from his school days have the star either saying "GIOGIO", "じょじょ" (JoJo in Hiragana

“
You can still think like that even without your memory disc? This isn't something learned through experience, but a creation of your innate intelligence? I see why they call you the 'deduction machine'.
”
—Kars about Jorge Joestar, JORGE JOESTAR Chapter 12: Rhinoceros Beetle

Jorge is a witty individual with a fastidious personality trait. As a result, his room is very clean and he's solved a number of cases as a private detective. He is a bit of a narcissist, often referring to himself as a great detective and having that listed as his title on his business card. Jorge gets caught up in details, and if details don't add up right then he gets agitated and attempts to search for a better way to solve his problems.[1]

Jorge is easily able to solve complex puzzles but despite his intelligence, Kars initially believes he's stupid and expresses disappointment that he is not as crafty as his adoptive grandfather, Joseph Joestar37. He states that Jorge lacks perseverance and gives up easily.[3]

Meeting Kars causes Jorge to end up becoming more bold, not caring whether he dies or not. He talks back to Kars and explains his reasoning of why he enjoys solving mysteries without even having his memory disc inside his head, which somewhat impresses the Pillar Man. Jorge also has a tendency of being overbearing, bossing Kars around although the latter can easily kill him.

Jorge has a Beyond named Trinity, which is shared with the original George Joestar from the first universe and Dio Brando. By believing that he is a detective who can outwit any case, Jorge's Beyond gives him confidence to solve his cases.

Before becoming a Stand user, Rohan Kishibe's Heaven's Door enables Jorge to see Stands to help him solve his mysteries.

Kars later gives Jorge a degraded copy of his U-Boat Ultimate in the form of a Stand Disc. It has the same functionalities as the U-Boat of Narancia Ghirga37. It allows Jorge to summon a colony of submarines which can scout, dive into the body of living things, and fire missiles. The colony can combine into a giant submarine as well.