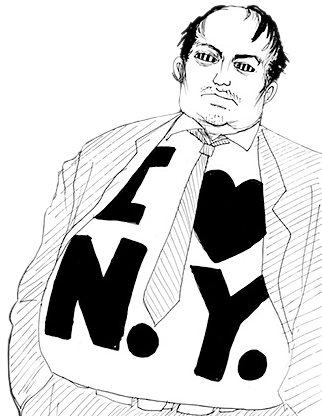 NYPD Blue (NYPDブルー, Enu Wai Pī Dī Burū) is the Stand of Fukashigi Nijimura, featured in the light novel JORGE JOESTAR. It takes on the appearance of a human police officer and is actually sentient. It has the ability to remotely look at all police records, record and broadcast what it sees, and use a gun.

NYPD Blue appears as a balding chubby middle-aged man wearing an unbuttoned suit and a tie. It has a light mustache and stubble. Its shirt has "I ❤ N. Y." imprinted on it in large, bold text. Aside from its eyes which have multiple vertical lines instead of irises, the Stand looks like an ordinary human.

NYPD Blue is a Sentient Stand described by Jorge Joestar as a good police officer with a foul mouth and an abrasive personality. The Stand acts like a stereotypical New Yorker. In fact, it doesn't realize it's a Stand and instead believes it's a New York cop, believing that Fukashigi brought it over to Japan from America. The Stand is always in a bad mood and constantly insults everyone, including Fukashigi.[1]

Despite its abrasiveness, NYPD Blue still listens to Fukashigi's orders. It can be mature and brave when the situation calls for it, acting as an experienced police officer and giving advice to Fukashigi to grow up.[2]

NYPD Blue has the knowledge and skills of a police officer. It has average offensive strength comparable to a human cop and its range is limited to how far a bullet from its revolver can travel.

NYPD Blue can use a Colt Python revolver loaded with .357 magnums stored in his side holster. According to the Stand, it can blow its victim's head off. Jorge mentions that the gun is huge and looks extremely realistic. It performs the same as a real gun.

The Stand can search through the data and records of all police organizations in any country, such as the Interpol, the Carabinieri, the CIA, and the FBI. It uses this ability to discover the identities of Dolcio Cioccolata and Secco Rottario and learn of their previous crimes. It can print out copies of the police records onto pieces of paper which shoot out from the gap of his shirt.

NYPD Blue can record whatever it sees and broadcast the footage live to any police organization throughout the world. It streams the activities of Cioccolata and Secco to the Interpol, the Carabinieri, the CIA, and the FBI.[2]

Although it is reluctant to do so, NYPD Blue is knowledgeable in performing autopsy procedures.[3]

Other languages:
English • português do Brasil
Retrieved from "https://jojowiki.com/index.php?title=NYPD_Blue&oldid=713210"
Categories: