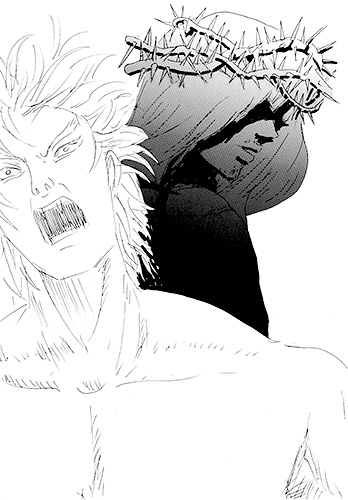 A Beyond (ビヨンド, Biyondo) is a metafictional ability that extends beyond time and space. Believing in their Beyond allows an individual to control their destiny. It is a power unique to the light novel JORGE JOESTAR, based on the JoJo's Bizarre Adventure series.

The concept of Beyond is comparable to God. Beyond is depicted as being the author of the story guiding the hero to where they should be or where they are needed at a certain moment of time. Beyond chooses someone to be the hero of their story. The hero has to be aware of their role, believe in Beyond, and understand that they are a fictional main character in a story.

It is implied that Tsukumojuku, God, and Beyond are all the same. It is later revealed that George, Jorge, and Dio all share the same Beyond, known as Trinity (, Sanmi Ittai), based on the Trinity concept in Christianity.[1]

Tsukumojuku teaches George and Jorge to believe in their Beyond. Tsukumojuku also states that for miracles like what Beyond could do to occur, one would need the name of a god. The name "George" is said to have derived from "Zeus Georgos", whereas Dio is the Italian word for god. Tsukumojuku means 9, 10, 9, 10, 9 (九十九十九). Flipping the kanji for 9 (九) creates the astrological symbol for Jupiter, ♃. Jupiter is the Roman name for the Greek god Zeus, known as king of the gods. The kanji for ten, 十, is a cross, so Tsukumojuku's name has three gods (九) linked together by two crosses (十). If God is considered to be the Trinity, then God can be split into three. After his death, Tsukumojuku is with George in England, with Jorge in the Arrow Cross House, and with Dio Brando in his coffin, all at once.[5]

In Christianity, the Trinity is composed of the Father, the Son, and the Holy Spirit. George represents the Father, being the father of Joseph Joestar. Jorge is the Son, as he is the adopted son of Jonda Joestar in the 37th universe's Joestar family. Lastly, Dio is the Holy Spirit, as his body parts are the corpse parts of the "holy man" from the second universe in the novel.

When George decides to have faith in his Beyond, Tsukumojuku appears to guide him to where he needs to be. As a result, George is teleported to Lisa Lisa and ends up helping her while also gaining an alibi of being in Rome when he is suspected for murdering Kenton Motorize back in England.[5] Tsukumojuku appears again to George one last time to save him from dying in his battle against Antonio Torres. He teleports George to Morioh in the 37th universe, allowing George to help Passione solve the mystery of Diavolo (Universe ?) and Yoshikage Kira (Universe 37)'s deaths as well as recover Reimi Sugimoto (Universe 37)'s memories.

George later uses his Beyond to have Diavolo revert back into his Giorno personality. He also wishes for the sun to rise in time to burn Dio's body, but Dio's own Beyond counters that fact and the sun doesn't hurt him as much.[3] In the end, he uses it to separate his soul from his body to avoid feeling Kira torturing his body.[1]

Tsukumojuku takes the 37th universe's Jorge to the H.G. Wells Spaceship, allowing him to meet Kars and temporarily gain the Stand U-Boat.[6]

He relies on his Beyond to catch Dio off guard in their final battle. Jorge also manages to revive Jonathan Joestar by placing his head onto the Saint's Corpse, which was actually Jonathan's original body.[1]

Dio uses his Beyond to avoid instantly getting burned by the sun. He defeated a parallel version of Kars, letting him become the Ultimate Thing. He also separates his soul in half and creates a fake version of himself by placing the other half in Giorno's body. Later, he creates a miracle in which Lucy Steel gets pregnant with a supplemental head of a holy man. As the Saint's Corpse is actually the body parts of Dio after becoming the Ultimate Thing, Lucy giving birth to the head allows Dio to reach Trinity Church and reclaim his body parts without anyone in the Steel Ball Run race suspecting why the corpse parts had no head.[1]