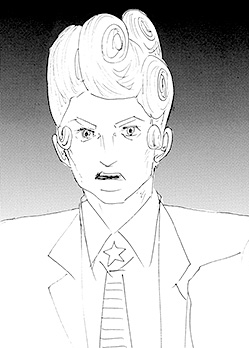 President of the United States[1]

The Funniest Valentine (ザ・ファニエスト・ヴァレンタイン, Za Faniesuto Varentain) is a supporting character in the 37th universe, featured in the light novel JORGE JOESTAR. Initially a tertiary antagonist, he later becomes an ally in the final battle.

The Funniest is a Stand User who wields Dirty Deeds Done Dirt Cheap, with the powerful ability to travel across parallel universes. He is the son of Funnier Valentine and the grandson of Funny Valentine from the 37th universe.

The Funniest is a tall man with a slim body. He has thick angled eyebrows and is described as being identical to his grandfather but with his curls cut short.[2] He has light curly hair pointed upwards, curling into several wide rings.

The Funniest wears an ordinary suit and tie. The top of his tie has a star.

Similar to the original universe's Funny Valentine, The Funniest is a dignified but immoral patriot. For the sake of the United States, he acts militantly and threatens to flip Morioh and all of its citizens when the town suddenly detaches itself from Japan and becomes an island sailing west toward America.[1]

Like his father, he doesn't hesitate to kill others for the sake of achieving his goals. He threatens to remotely detonate the H. G. Wells Spaceship that his father and the other astronauts are on, lying that it is to prevent Ultimate Kars from returning to earth. However, he and Funnier had already planned beforehand and negotiated with Kars, stating that they would provide him a method of reentry to earth if Kars does not eat any Americans.[3]

He is brave and risk-taking, staying calm as he jumps down from a helicopter without any parachute. He temporarily cooperates with Dio Brando until Dio decides to get the Saint's Corpse for himself. The Valentines believe they have a duty to keep the Saint's Corpse in America and will stop at nothing to fulfill that duty, even if wars or genocide occurs as a result.[2]

The Funniest has the same Stand as the Funny Valentine from the second universe where the first Steel Ball Run race took place, as well as a different Funny Valentine from an unknown universe. Dirty Deeds Done Dirt Cheap (D4C), enables him access at any time to any number of alternate worlds/universes/dimensions. If desired, he may swap bodies with his counterparts, granting him pseudo-immortality. This requires him to get caught between two objects, such as a flag and the ground. He can warp others away with the same process.

The Funniest, Funnier, and Funny

Five other people had been the president in between The Funniest and his grandfather, Funny Valentine. The Funniest is the current president as of 2012 in the 37th universe.[1]

He assists his father with a plan to negotiate with Kars for their own advantage.[4]

At some point, he becomes Dio Brando's minion along with the Funny Valentine from another universe.[2]

The Funniest has his grandfather deliver a message to Morioh, stating that his American army will flip over the island if nothing is done to stop Morioh from sailing toward America.[1]

Later, The Funniest appears on the loudspeaker in the H.G. Wells spaceship and informs the astronauts in Mars that he is presently at the UN Headquarters in New York, attending an emergency meeting regarding the mysterious life form which they are calling The Eyed Balloon. The Funniest shows the astronauts seven images of The Eyed Balloon's interior, highlighting the Giotto probe floating in the back. The Giotto probe was launched into space in 1985, but somehow there are now seven Giotto probes which all have the same ID. The Funniest then gives them an ultimatum to escape The Eyed Balloon's tentacles in ten minutes or they will detonate the H.G. Wells spaceship remotely to prevent Kars from returning to Earth.[3] 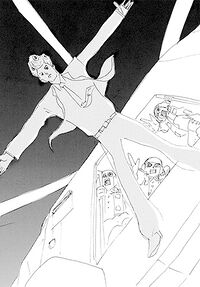 Jumping without a parachute

During the fight against Dio Brando, the American Air Force starts dropping missiles to break through the barrier surrounding Great Britain, inside the stomach of the giant Antonio Torres. Eventually, the giant Antonio spits out a military helicopter with The Funniest Valentine and the elderly Funny Valentine inside. Dio summons The Funniest while battling Kars, who then leaps out of the helicopter without a parachute. At Dio's cue, the Funny from another universe runs toward the place where The Funniest is about to land and then claps his hands as The Funniest falls into his arms. The Funniest vanishes and then Funny leaps toward Kars. With assistance from Dio's The World positioning Funny in place, Funny claps his hands on the Pillar Man. However, as time resumes, Kars quickly contorts his body to avoid the clap. Dio continues trying to stop time as Funny attempts to trap Kars between his palms but Kars would rapidly contort his body as soon as time resumes. In the moment that Kars smirks stating that he has figured out Dio's Stand, Funny finally succeeds in teleporting him to a parallel world. Jorge notices The Funniest's hands sticking out of Funny's hands to extend his reach, revealing that The Funniest has the same Stand as Funny, D4C. Suddenly, Jorge Joestar is pulled toward The Funniest's hands from a thin strand of Kars's hair wrapped around Jorge's neck.

Jorge finds himself in Manhattan Island in The Funniest's parallel world. He meets with Funny, who reveals that he had his own plan with The Funniest to defeat Dio. Funny notes that since Jorge is a singularity, he is the key to defeating Dio's Stand The Passion which could see the future, and that Kars has realized this.

Group of Funny and The Funniest fighting Kars

Once Jorge and Kars return to fight Dio, The Funniest brings out a parallel world version of Dio. This Dio grabs Kars from behind him, as a group of nine Funny Valentines and nine The Funniest Valentines surround Kars. 36 hands clap down on Kars and he vanishes once more along with the other Dio. Meanwhile, the group of Funnys collides with the group of The Funniests and disintegrate into Menger sponges.

Funny and The Funniest explaining their duties

Later as Dio starts speeding up time with Made in Heaven Ultimate Requiem, Funny and The Funniest discover that Dio is headed for the past beyond the future. They reveal that the Valentines have two duties as leaders of the United States. Their first is to intervene in the Steel Ball Run race and their second is to protect the secret held underground at Trinity Church, the Saint's Corpse. The corpse was gathered by their ancestor, the original Funny Valentine from the 2nd universe during the first Steel Ball Run. They realize now that the corpse of the "holy man" was actually just the body parts of Dio, separated from his fight with Kars.

Before Kars activates his plan to go back in time with Bites the Dust, The Funniest leaves back to America by entering the mouth of the giant Antonio.[2]