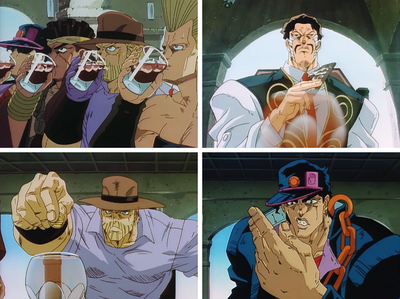 D'Arby the Gambler (ダービー・ザ・ギャンブラー, Dābī Za Gyanburā) is the tenth episode of the JoJo's Bizarre Adventure OVA. It adapts Chapter 211 through Chapter 216 of the manga.

The companions search the huge Egyptian capital of Cairo, showing everyone they meet the photo of a mysterious building where they think DIO resides. Polnareff, Avdol and Iggy cannot learn anything and meet with the rests of the rest of the group in a café, in which Joseph calls the Speedwagon Foundation and learns that Holy doesn't have long.

As they leave the café, one of the clients recognizes the building. The man is shown to be a gambling addict who wants the group to gamble the information: he asks them to choose which of two pieces of meat a nearby cat will take first. Polnareff angrily accepts to gamble and wager his soul. He loses and the gambler thus takes his soul with his Stand, Osiris. Presenting himself as Daniel J. D'Arby, the man turns Polnareff's soul into a poker chip. However, the group cannot attack him for fear of killing Polnareff for good.

Joseph then challenges D'Arby to another game. Filling a glass with alcohol, Joseph tells D'Arby that they will put coins in the glass in turn and whoever makes the glass leak loses. D'Arby checks the glass and accepts the challenge, he thus confidently puts five coins at the same time. Joseph tries to cheat, but D'Arby has already hidden a piece of chocolate under the glass to make Joseph miscalculate the amount of liquid. Joseph is cornered and loses his soul.

Jotaro then challenges D'Arby to a game of poker. On their first hand, Jotaro catches D'Arby trying to cheat at the dealing and breaks his finger. D'Arby decides to play seriously and splits Joseph and Polnareff into six chips each. Jotaro loses the next hand and half his soul. On the second hand, Jotaro doesn't bother to check his cards and declares his confidence. Ensues a psychological battle in which Jotaro shows off Star Platinum's speed, confidently wagers the souls of his remaining companions with confidence and ultimately gambles his mother's soul, demanding that D'Arby reveals the secret of DIO's Stand in exchange. Destabilized, D'Arby is pushed into folding and turns mad from the pressure. Joseph and Polnareff are revived, although it is revealed that Jotaro had a worthless hand all this time.