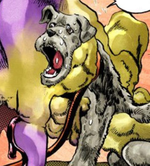 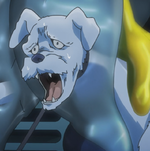 (American musicians)[1]
Prince (プリンス, Purinsu), Michael (マイケル, Maikeru), and Lionel (ライオネル, Raioneru) are three of the five chickens Muhammad Avdol raised on the secluded island he lived on after faking his death. Disguised as his father so no one would come after him as he recovered from Emperor's bullet wound, Avdol fed the chickens so they would grow fat and tasty, but didn't like it when they ate too fast. When Avdol rejoined the Joestar group, he left the chickens on the island with no one to take care of them.
Clone Sherry

Manga Debut: Chapter 63: Joseph Joestar of Rome (Mentioned only)
Anime Debut: SC Episode 21: Judgement, Part 1 (Mentioned only)
Clone Sherry is a golem created by the stand Judgment when Polnareff asks it to revive his dead sister after the Stand offers to grant him a wish. The Stand manifests a golem

that looks and sounds exactly like her, including having her memories. She suddenly attacks Polnareff when he lets his guard down and gets close enough.[2] The figure is ultimately destroyed when Judgement throws it at Magician's Red as a diversionary tactic.[3] In the anime, however, the Sherry clone is still alive. Polnareff catches the figure, and, accepting the death of his sister, impales the clay figure, killing it for good.
Clone Avdol 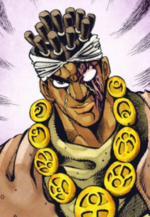 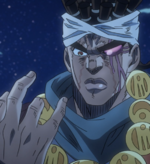 created by Judgment. It nearly perfectly resembles Avdol and seems to be a sadistic entity. When Polnareff begs for fake Sherry to vanish, Judgement taunts him and celebrates victory as he reveals Polnareff's 3rd wish, the return of the deceased Avdol. This golem attacks Polnarff alongside Sherry but gets dispatched when the real Muhammad Avdol ambushes them with Magician's Red.[3]
Caravan Serai 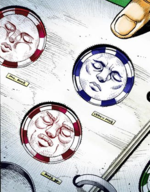 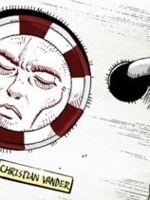 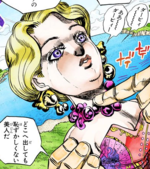 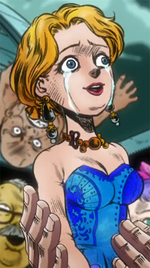 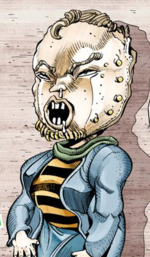 (American song writer and musician)
Al Yankovic (アル・ヤンコビック, Aru Yankobiku) is a singer that Jotaro mentions when testing Joseph to see if it was actually him or DIO in disguise. He asks who sang the parody of the song "Beat It", named "Eat It". Joseph correctly answers that it was Al and is saved from a beating from Jotaro.