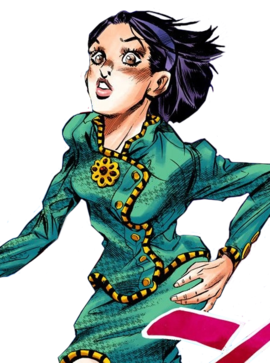 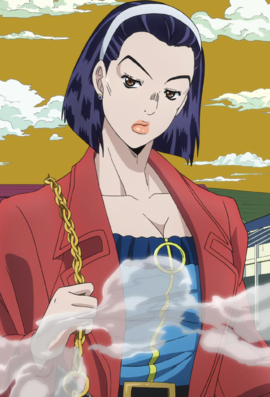 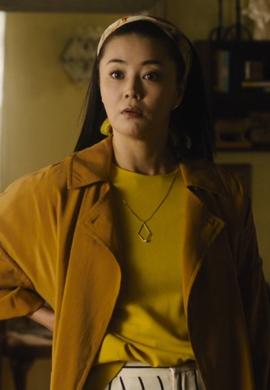 DU Episode 1
For a similar character, see Tomoko Higashikata (JoJolion)
“
I hope Josuke's behaving himself. He just got into high school. I really don't get that brat sometimes. But, he is really tender and gentle deep down, so I guess I shouldn't worry so much.
”
—Tomoko to Ryohei Higashikata, Chapter 268: Jotaro Kujo Meets Josuke Higashikata!, Part 3 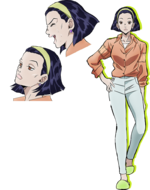 Tomoko is a woman of seemingly average height and slim to medium build. She wears dark, straight, roughly neck-length hair with a hairband.

Though her appearances are few, she has changed her clothes at each time she is seen. She is described by many male characters as being overly attractive. 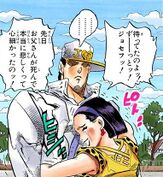 Tomoko is introduced as a short-tempered woman, assaulting a man who catcalled and then offered a ride to her. She then receives the visit from Jotaro Kujo, whom she mistakes for Joseph and hugs. In tears, she confesses her love for him but backs off bewildered when Jotaro lets her down that he isn't Joseph. She takes a long time to change Ryohei Higashikata's bedroom, depressed about his death by a stroke (which was actually the doing of Aqua Necklace).

Later on, she is attacked by Terunosuke Miyamoto, who invades her house and turns her into paper with his Stand, Enigma, after seeing her sign of fear (swallowing her saliva). Terunosuke then used her to see Josuke´s sign of fear, but was defeated by Josuke and Yuya Fungami and Tomoko was saved.