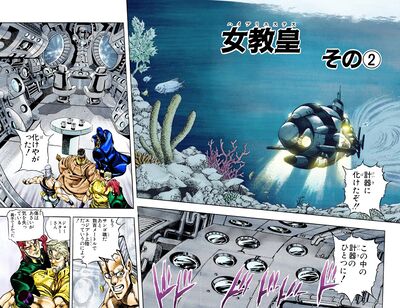 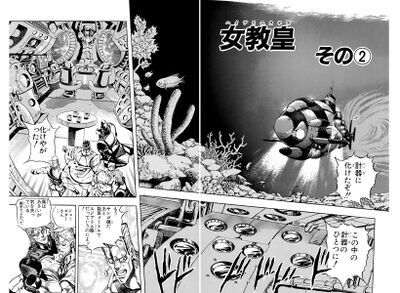 Within the submarine, the group cautiously stand away from the enemy Stand hiding among the submarine's gauges. Joseph remains unconscious from the Stand's attack. Avdol reveals that the Stand is High Priestess used by Midler, and is a long range Stand that can turn into anything as long as it's made of a mineral. The submarine begins to fill up with water from the hole High Priestess made when it entered the sub. Jotaro attacks a gauge that Kakyoin believes to be the Stand, however the Stand already moved, appearing behind Kakyoin. Avdol warns the two as High Priestess attacks Kakyoin's neck. Jotaro tries to punch it with Star Platinum, but it dodges it, melting back into the sub's wall. Avdol takes charge and commands the group to go into the sub's other room. He tries to open the door, but High Priestess appears from the door. It tries to attack Avdol, but Star Platinum quickly grabs it, holding it in place. Jotaro tries to crush it with Star Platinum's immense strength, but the Stand transforms into a razor blade, and flees into the sub's ceiling. The group flees to the other end of the submarine, while Jotaro proclaims that he will personally destroy the enemy. Avdol explains that they have to escape from the submarine, and the group begins equipping scuba gear.