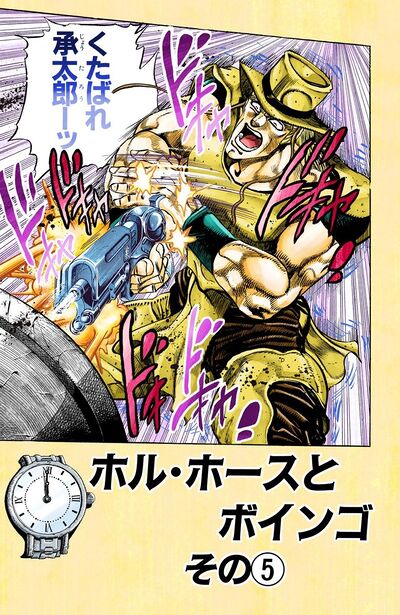 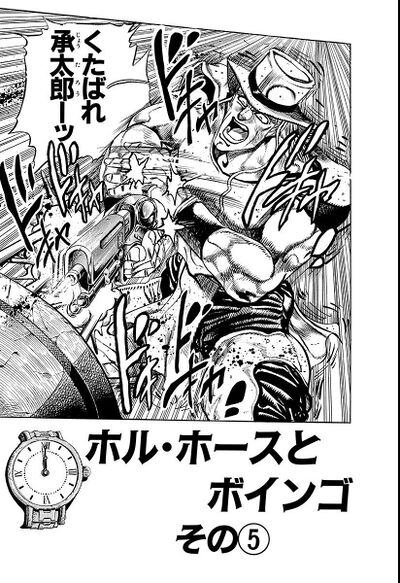 Hol Horse shoots his bullets into the pipe in hopes that they will come out the other end and shoot through Jotaro's head. The Joestar group begins to recover from the car accident. Hol Horse eagerly awaits the death of his greatest enemy, but as the bullets exit the pipe, Polnareff sneezes onto Jotaro. Jotaro pulls his head back in disgust causing the bullets to whiz by harmlessly. Hol Horse and Boingo stare in amazement as Tohth's predictions have never been wrong before. However, according to a nearby radio, it has just turned noon, the exact time the bullets would hit their target. Hol Horse, realizing he shot too early, wonders what will happen as the bullets return to their user. He holds Tohth up to his face, confused as to the weird prophecy. As he does this, the bullets rip through the book and into Hol Horse.

Hol Horse is put on a stretcher and is taken to the hospital. Due to the bullets being part of his Stand, he was able to stop them before they penetrated his skull, allowing him to live. After seeing both his brother and Hol Horse lose to Jotaro's luck, Boingo realizes that vengeance is a silly act. He decides that rather than use his power to attack others, he will use it to help instead. Boingo kicks the box he hid under, showing that he will no longer hide from the world and that he has transformed into a good human being. Unfortunately, though, fate is a cruel mistress. The box lands on a sleeping Iggy, causing the beast to go into an intense rage. Boingo joins Hol Horse in the hospital, now more introverted than ever before.