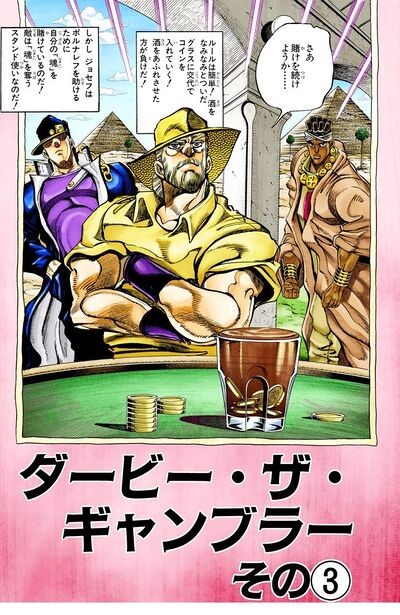 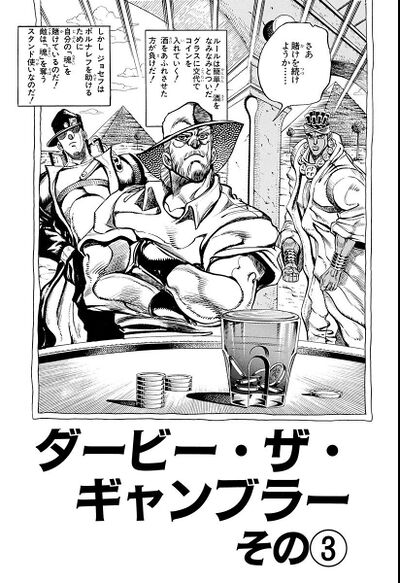 Thanks to Joseph's cheating, the glass is at the point of overflowing. It's D'Arby's turn to insert a coin. If he loses he must relinquish Polnareff's stolen soul. D'Arby stands up and moves to another side of the table, claiming that the glass being in his shadow was making it difficult. D'Arby predicts that Joseph thinks the surface tension is at its limits, and that the glass will overflow. D'Arby reveals however that this is untrue and puts in another coin with ease. Joseph is completely aghast, thinking his plan was flawless. Jotaro states that Star Platinum picked up no suspicious movements from D'Arby. It's Joseph's turn, but he is unable to fathom what happened. The moment his seemingly perfect plan was defeated, in his heart, Joseph had lost. This allows Osiris to capture his soul. Now Avdol and Jotaro are the only hope in taking down this powerful foe. While Avdol fails to hold back his anger, Jotaro examines the glass and notices a bit of chocolate on the bottom. Jotaro realizes that D'Arby had put it there when he inspected the glass before the gamble, causing the glass to not be level. When D'Arby moved to another side of the table, the sun behind him melted the chocolate, leveling the glass and allowing another coin in. Jotaro then decides on the next bet; a game of poker, D'Arby's strongest game. Jotaro admits that despite not being violent, D'Arby is the most challenging adversary they have faced. Jotaro orders D'Arby to shuffle the deck, and then successfully guesses the identity of the first nine cards, showing off Star Platinum's perception. He does this to show D'Arby that cheating is futile against him.