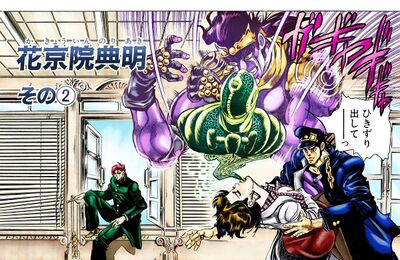 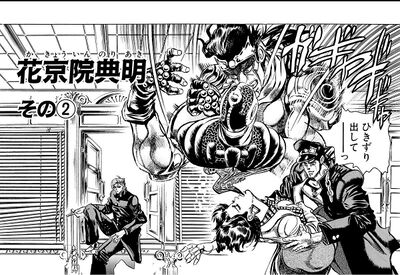 Noriaki Kakyoin, Part 2 (花京院典明 その②, Kakyōin Noriaki Sono 2), originally Who Will Be the Judge?! (裁くのは誰だ!?, Sabaku no wa Dare da!?) in the WSJ and tankobon releases, is the sixth chapter of Stardust Crusaders and the one hundred nineteenth chapter of the JoJo's Bizarre Adventure manga.

Jotaro's Stand successfully pulls out Kakyoin's Stand, Hierophant Green, from the nurse's mouth. It is a Stand made up of viscous, stringy matter. Kakyoin attacks with Emerald Splash, a technique where Hierophant Green shoots liquid energy in the form of sizable emeralds from its hands. Jotaro and his Stand are badly wounded from the assault, as is the school nurse.

Kakyoin blames Jotaro for everything that had happened, claiming that it was his actions and resistance that led to collateral damage being done. Jotaro stands up, angry at his opponent's own actions. The two of them have a discussion about justice; Jotaro mentions that he never said that he was a nice guy himself, but he judges Kakyoin to be far more evil than him. Kakyoin believes that the winner of any battle is the one who is righteous, while the loser is the evil one.

Jotaro smirks at Kakyoin's remark and is determined to show just how evil Kakyoin is, as he will be the loser. Hierophant Green launches another Emerald Splash, which Jotaro's Stand deflects with its arms. Jotaro's Stand unleashes its anger on Hierophant Green, violently strangling and beating its face, before uppercutting it with a fierce punch.

As a result, the whole room becomes a mess with scattered rubble, broken doors, and windows shattered. The infirmary and the floors above are devastated by the aftermath, and Kakyoin falls unconscious from his injuries. Before anyone from the school can find out what happened, Jotaro picks up Kakyoin and leaves for home, intending to make him talk about DIO.