The Miasma of the Void, Vanilla Ice, Part 6 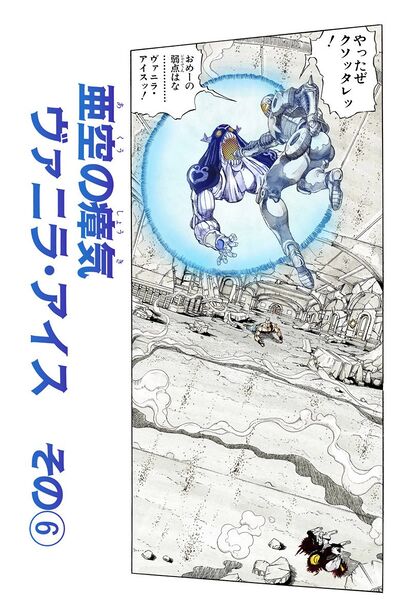 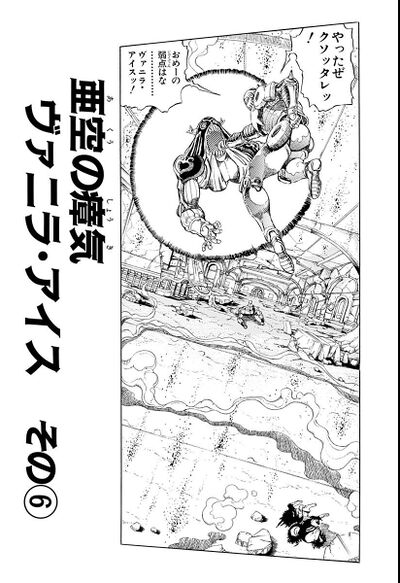 The Miasma of the Void, Vanilla Ice, Part 6 (亜空の瘴気 ヴァニラ・アイス その⑥, Akū no Shōki Vanira Aisu Sono 6), originally Attacking Until Something Hits!? (数撃ちゃ当たる!?, Kazu Ucha Ataru!?) in the WSJ release, is the one hundred thirtieth chapter of Stardust Crusaders and the two hundred forty-third chapter of the JoJo's Bizarre Adventure manga.

Polnareff figured out Cream's weakness: Vanilla Ice cannot see within the void and must reveal himself to scan the area. Polnareff used this chance to stab Vanilla Ice through the mouth. However thanks to DIO's blood, Vanilla Ice is able to survive the attack. Cream grabs Silver Chariot by the throat and breaks its arm. He then starts to insert Chariot's hand into Cream's mouth, erasing Polnareff's ring and pinky fingers. Vanilla Ice tries to erase the rest, but Chariot stabs Vanilla Ice's hand. Vanilla Ice then breaks Polnareff's sword arm. Silver Chariot kicks Cream away before it can do even more damage. Vanilla Ice begins to return to his dark dimension, but Chariot is able to get a strike in beforehand. The damage wasn't enough to stop Vanilla Ice as he erases part of Polnareff's leg. Cream's void comes around to attack Polnareff. Chariot stabs the void, his blade completely erased by it. Vanilla Ice, unable to see, begins flying around at random, erasing the mansion's wall. Polnareff grabs Iggy and returns Chariot to him in the center of the room. Cream begins flying in a circular pattern around Polnareff. Each revolution gets closer and closer to Polnareff. Polnareff has no way to escape, having no time to dig a hole in the floor.