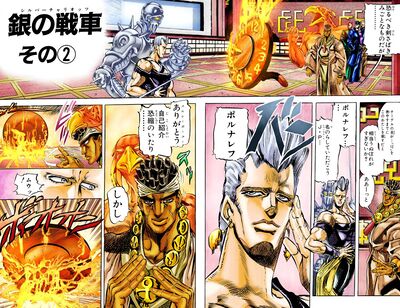 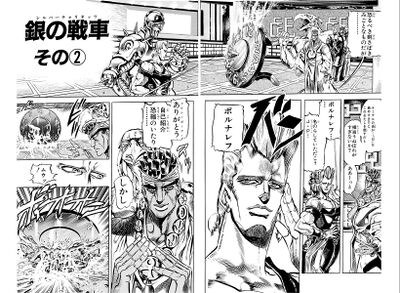 Silver Chariot, Part 2 ( その②, Shirubā Chariottsu Sono 2), originally The Flaming Figure (炎の人形, Honō no Ningyō) in the WSJ release, is the twelfth chapter of Stardust Crusaders and the one hundred twenty-fifth chapter of the JoJo's Bizarre Adventure manga.

In response to the French tourist's cockiness, Avdol destroys the table with the fire clock he made with just a swing of his hand and states that the fire he makes doesn't behave in the same way as other fire would. He asks the tourist his name. The tourist introduces himself as Jean Pierre Polnareff and proclaims that he will defeat Avdol in a place where Avdol can use his full power, suiting his Stand's victory represented by the Tarot Card, The Chariot.

Polnareff leads the group to Tiger Balm Garden, an open space where Avdol can fight better, and predicts the fate of the fortune teller: he will be killed by his own Stand. Sure of his victory, Polnareff carves a statue of Magician's Red while fighting, showing that he is not fighting seriously. Avdol uses his attack, Crossfire Hurricane, which is reflected by Silver Chariot back to the fiery Stand. Polnareff attacks the now burning Stand, confident that his prediction came true, but is surprised when he's hit.

It is revealed that Polnareff actually threw the attack back at the statue he made earlier, the fire having confused Polnareff and made it hard to tell the difference between the statue and the Stand. Avdol tells Polnareff not to underestimate his Stand and mocks him, saying that he is the one who will be defeated by his own Stand. He tells Polnareff how foolish he was to predict something in front of a fortune teller.