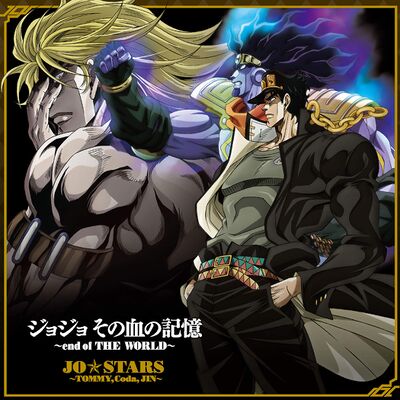 "JoJo Sono Chi no Kioku ~end of THE WORLD~" peaked at number 17 on the Oricon's Weekly Singles Charts, during the week it was released.[2] 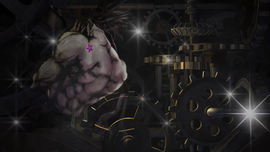 The opening begins in a dark background of turning gears and a swinging pendulum, with the pendulum progressively moving upwards. On each swing left it shows a JoJo - young Jonathan Joestar, older Jonathan, Joseph Joestar, then Jotaro Kujo, with Jotaro and Joseph appearing as they do in Stardust Crusaders. On each swing right it shows Dio Brando, with the first two swings showing his two designs in Phantom Blood, the third being his appearance in the Spirit Photograph Joseph took of him, and the fourth being a close-up of his face, in shadow and covered by his hand, showing only one of his eyes. The music also plays a heartbeat, which synchronizes with each swing of the pendulum.

After the pendulum's last swing, the scenery changes to a desert with clockwork gears strewn about. Here, the sextet demonstrates their different Stand abilities. After Jotaro, Joseph and Muhammad Avdol, Noriaki Kakyoin is shown performing his infamous Emerald Splash, while pointing and with the same pose he assumes before launching his 20-meter radius Emerald Splash in his final battle against DIO. Finally, there's Jean Pierre Polnareff dual-wielding rapiers, foreshadowing him unwillingly falling under the control of Anubis. The scenery changes after Silver Chariot unleashes attacks at the camera. 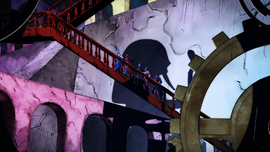 In what appears to be Kenny G's labyrinth, the sextet are then seen climbing a dark staircase. A spotlight swings left and right 4 times, each swing showing a different silhouette of an Egyptian god, foreshadowing the enemies whose Stands are based on the deities. The scene switches to the downward view of the staircase, with Polnareff and Joseph on the left, Jotaro in the center, and Iggy, Muhammad Avdol and Kakyoin on the right side. Iggy is also shown to have a missing and bandaged right leg, referencing his fight with Pet Shop. The scene zooms into Jotaro before the staircase shatters around him. Jotaro then summons Star Platinum in sync with Jin Hashimoto's singing the Stand's name. This scene is foreshadowing of which Crusaders survive, with the soon-to-be-fallen appearing on the right side of the screen.

The scene changes into the sextet standing on top of a building, watching the sky turn to dusk, and the lights turning on at the Cairo skyline. Next, the pendulum swings again, each showing the heroes fade into a silhouette. This is actually another foreshadowing of the fate of the heroes, cleverly disguised as visual effects. First, Avdol is shown reaching out to Polnareff and Iggy, depicting the moment before Vanilla Ice kills him. Both Avdol's and Iggy's silhouettes are red, whereas Polnareff's is blue, implying that he is the only survivor of the Vanilla Ice fight. Next, there's another 20m radius Emerald Splash reference, with Kakyoin at the center surrounded by a web of Hierophant's tentacles, showing the moment before DIO blasts him into the water tower behind. Then, Joseph is shown reaching out in the same way he does to Jotaro before DIO stops time and throws a knife at Joseph's throat, momentarily killing him. This is further depicted with a sharp line aiming at Joseph's throat, coming from the top-right of the screen. Finally, Jotaro is shown frozen, suspended in mid-air, surrounded by more sharp lines - once again depicting knives -, although he briefly moves a finger during the freezing, implying his eventual tolerance to The World's time stop abilities.

The scene changes into shooting stars, with the sextet emerging from it, referencing an artwork by Hirohiko Araki. The sextet is seen standing shoulder to shoulder, this time referencing a similar shot from when the group arrives in Egypt, which then briefly switches to their Stands.

Jotaro is then seen reaching the top of a flight of the stairs, his fists clenching, with Star Platinum emerging from within, who then unleashes blazing fists. A view of The World can be briefly seen before the screen shatters. The scene then zooms onto Jotaro's face, with a silhouette of who appears to be DIO appearing to the right. Jotaro immediately turns around and unleashes a barrage of punches with Star Platinum.

The scene changes into a flurry of ORAs, in Katakana, which turns into JO, also in Katakana, while all three singers chant Jotaro's battle cry repeatedly. A view of Star Platinum and The World trading punches can be seen briefly. The Jo☆Stars shout "ORA!!" as the JJBA Starudst Crusaders logo shows, that is later vaporized by what appears to be the sun, the same fate that ultimately finishes off DIO.

The Opening during SC Episode 47 has a different ending from the original entirely. Rather than leaving to Star Platinum punching the screen, The World interrupts, punching it as well as DIO calls out his Stand's name - stopping time as the screen shatters. The music pauses, with the only sounds being DIO's footsteps. A fully revealed DIO then walks past Jotaro, soon adopting a smug smile, in a sequence that takes exactly 9 seconds. After he walks past Jotaro, time resumes with a "Sono Chi no Kioku!". As Jotaro turns, The World and Star Platinum begin their attack rushes as both of their users look on, their battle cries ringing out as the blows land. The traditional scene changes into a flurry of ORA in Katakana, which turns into JO, also in Katakana, is instead a flurry of ORA in Katakana, and MUDA in Kanji.

In SC Episode 48, the final episode of the season, the opening has been changed even more to include sound effects, such as Silver Chariot's swishing swords or the general noise of Stands manifesting. Also, when the camera pauses after moving to Jotaro on the staircase, The World is seen punching away the credits and the staircase around him, explaining why it shattered in the original version. The silhouette section also adds new images for a split second; DIO is shown standing at the top of the "stairs" Polnareff, Iggy, and Avdol are climbing; the line representing DIO's knife flying at Joseph's throat is replaced by DIO's arm appearing to drain Joseph of his blood; when Kakyoin erects his barrier, The World appears in front of him, ready to strike him down; and when Jotaro is surrounded by knives, Star Platinum appears to try and knock them away.

(2nd version only)
The World

Other languages:
English • português do Brasil
Retrieved from "https://jojowiki.com/index.php?title=JoJo_Sono_Chi_no_Kioku_~end_of_THE_WORLD~&oldid=786616"
Categories: