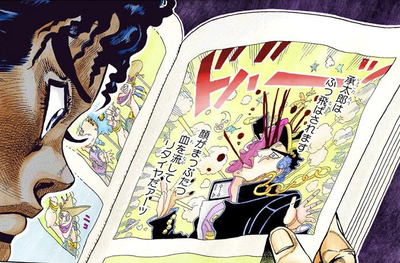 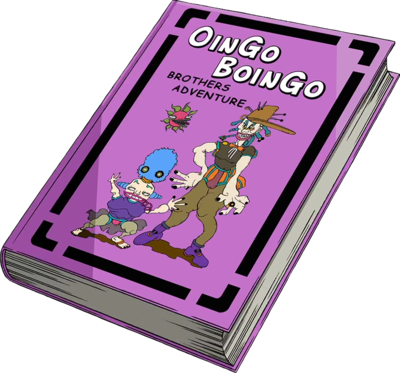 Destructive Power
E
Speed
E
Range
E
Stamina
A
Precision
E
Developmental Potential
E
A
B
C
D
E
A: Very Good
B: Good
C: Average
D: Poor
E: Very Poor
This Stand may sometimes be referred to as "Thoth".
“
M...M...my Stand Tohth can only see the near future...It can't see too far...but... once something is printed it can't be changed!
”
—Boingo, Chapter 191: "Khnum" Oingo and "Tohth" Boingo, Part 3

Tohth (トト神, Toto-shin) is the Stand of Boingo featured in the third part of the JoJo's Bizarre Adventure series, Stardust Crusaders.

Representing the Egyptian God, Tohth, it takes the form of a comic book that allows its user to see into the very near future. 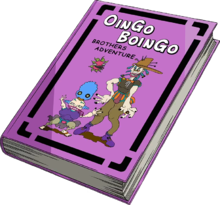 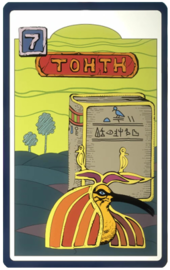 As a Materialized Stand, Tohth takes the form of a comic book that even non-Stand users can see and interact with. The cover of the comic is titled "Oingo Boingo Brothers Adventures," and adopts a peculiar, whimsical art style, comprised of distorted caricatures of the characters and the environment complete with abstract symbols and similar stylistic quirks.[1]

It represents the Egyptian God, Tohth, the god of knowledge, alluding to the Stand's ability to predict the future.[1]

As a comic book, Tohth is not sentient and the narration inside only reflects Boingo's thoughts or describes what will happen in the third person perspective.

However, in the Crazy Diamond's Demonic Heartbreak spin-off, the Stand begins to show hints of personality. The narration in the book starts to directly address Boingo. For instance, it thanks him for always reading and then tells him to part way with the book.[2] Boingo actually thinks that Tohth is not truly his Stand and that there is a real 'Tohth' somewhere in the world who has merely chosen him to be the comic-book's guardian.[3]

As a mere foretelling comic book, Tohth is not suited for direct combat at all, but is a valuable tool if one wants to take the upper hand in any situation. Thanks to it, the Joestar Group was almost killed in Aswan by Oingo and in Cairo by Hol Horse.[4][5]

Tohth beginning to predict the future

Tohth's ability is to predict the future. The book is mostly filled with blank pages, but as time passes, more pages will fill up, predicting coming events up to several minutes ahead in the future.[1] Moreover, the events predicted in the book are always relevant to the reader, such as when a manga artist read his own future death,[1] or when Oingo read about his future attempts at assassinating the Joestar Group.[4] Boingo claims the events depicted in the comic book are guaranteed to come true;[6] in all its appearances, the predictions happen without fail, although sometimes in a roundabout way. For example, while it depicts Jotaro's head being split up by a blast,[6] it is Oingo, with the appearance of Jotaro, who is blasted apart by his bomb.[7]

However, Tohth only predicts key events without showing what happens between them or significant details. Because the drawings are incomplete and the narration is often misleading, everything Tohth predicts is subject to interpretation. For instance, Tohth stated that Hol Horse would kick a woman, after which she would be thankful and give him all her jewelry, leaving out the fact that Horse would do so to save her from being stung by a poisonous scorpion.[8] Furthermore, it only predicts the very near future, meaning that actions that seem beneficial may have consequences later. Because of the comic book, Oingo mugged a man he thought was easy prey,[4] only for the man to come back with several thugs ready to beat him up.[7] This makes Tohth incredibly difficult to use.

If someone were to not act as the comic book predicted, even by accident, like when Hol Horse shot two minutes ahead without realizing it,[5] Boingo claims that they would be punished and the events would conspire to make the predictions true at the expense of the offender.[9] Thus Hol Horse was shot through the page depicting Jotaro being riddled with bullets, making the predictions true in a way while almost killing Hol Horse.[5]

In the spin-off Crazy Diamond's Demonic Heartbreak, Boingo claims that Tohth is actually not his Stand, but rather, something that was entrusted to him by the real 'Tohth' somewhere in the world. As such, it means that Boingo and the book share a unique link. Boingo states that even if someone were to get rid of the book, like when his father sold it, Tohth would reappear by his side without explanation.[10]

Araki wanted to create an intriguing story by making an enemy with precognitive powers. He was inspired to create Tohth by thinking about his own future at the time, having recently been married.[11]