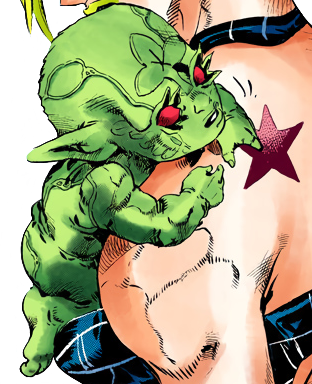 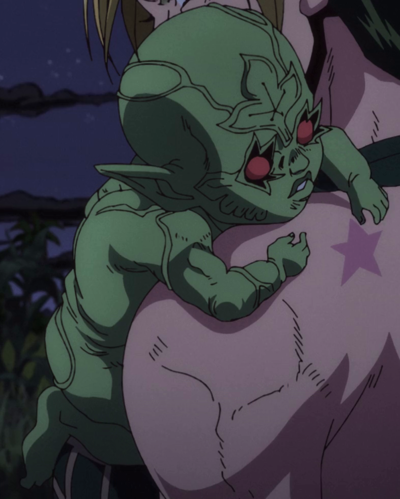 The Green Baby is an infant child with green skin, large, pointy ears and a veiny body. The baby's eyelids protrude out like leaves, along with a leaf-shaped mark on its forehead and cheeks. The baby's spine noticeably sticks out and it bears the Joestar Birthmark on its neck.

The Green Baby largely behaves as a normal infant would, showcasing a general curiosity to its surroundings and a habit of chewing on things like Anasui's hair. It also has a tendency to fall asleep frequently and eat dirt, which Jolyne surmises is due to it being a plant.[2] However, it has a particular interest in the Joestar birthmark, trying to get closer to it and being attached to Jolyne.[3] It is also especially drawn toward the audible incitement of the 14 phrases and DIO's bone.[4][5]

The Green Baby demonstrates a variety of supernatural abilities seemingly independent of its Stand.

The child has the ability to burn handprints onto objects without touching them, first shown with marking Anasui's hand.[6] It can create handprints of various sizes, making a large print in the grass during Jolyne's battle with Pucci near the marshes,[7] and another smaller mark on a cup after fusing with Pucci.[8]

The Green Baby also seems to have the ability to generate a deadly ripple.[6] After falling off Jolyne and Anasui's boat, the child creates ripples in the water, killing fish and scaring birds in the immediate area. Jolyne and Anasui are unharmed by this. 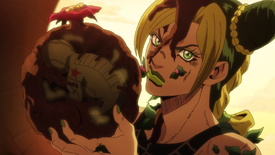 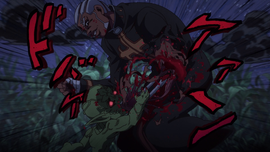