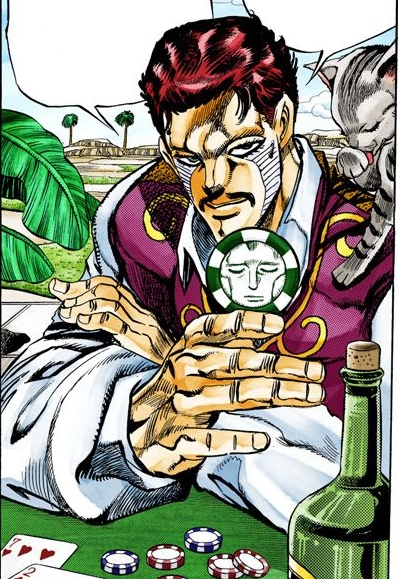 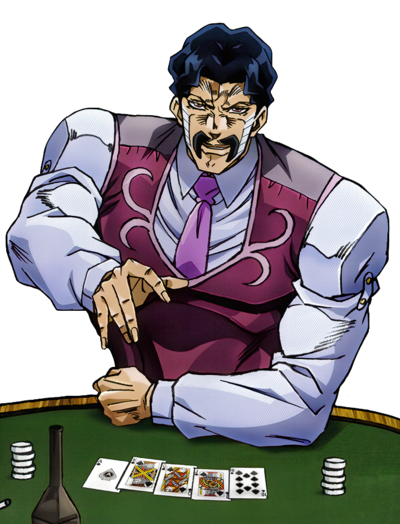 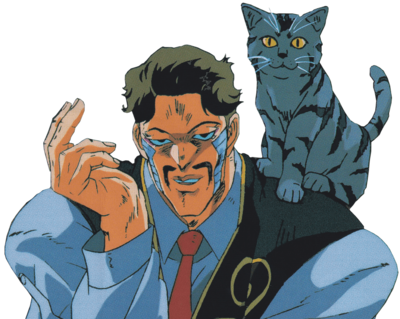 D'Arby is an expert and inveterate gambler and his Stand, Osiris, can steal souls. He is a member of the Egypt 9 Glory Gods and meets the Joestar Group in Cairo. Here, he tricks them into wagering their souls in various gambles. D'Arby is also Telence T. D'Arby's older brother.

D'Arby is a man of average to above-average height and slim to middling build.

He wears dark hair of middling volume, flowing slightly back and apart from his face, and a trim mustache of medium length. A light surface trails from the bottom of his eyes to points aside his mouth; scored by thin, black, horizontal lines.

He wears a light shirt, dark tie, and a vest of a medium color, printed with spirals.

“
I think gambling is the same as social relations... it's a game of fakes and cheats. The one who cries first is the loser.
”
—Daniel J. D'Arby, Chapter 212: D'Arby the Gambler, Part 2 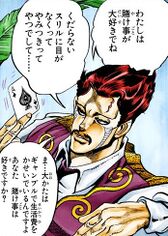 D'Arby tells the Stardust Crusaders about his love for gambling

Daniel J. D'Arby exhibits an affable but sly, knowing character. D'Arby first and foremost character trait is his love of gambling. He states that he lives for the thrill of gambling (which he recognizes as worthless). This love of gambling is complemented by his enjoyment for cheating, and he proudly admits that cheating is one of his greatest skills shamelessly rigging every game he's seen participating to while justifying himself by claiming that if the cheat isn't exposed, it is "fair" game.

His addiction to gambling is such that he can remember specific instances of when he gambled on one. Moreover, D'Arby developed a philosophy comparing gambling to social life, claiming that like gambling, it revolves around fakes and cheats. According to him, those who are stupid enough to be cheated simply deserve it and have no right to complain, exhibiting a belief in a form of social Darwinism. In contrast, D'Arby readily accepts that Jotaro Kujo broke his finger when the student saw through one of his tricks as his punishment. 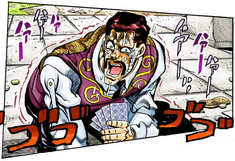 Therefore, D'Arby has also great pride and confidence in his ability, as he calls himself the greatest gambler in the world. D'Arby reveals himself as soon as he wins Polnareff's soul and openly challenges Jotaro's group. When his pride is on the line, D'Arby outright states that he isn't battling the Joestar Group for his master DIO but for his pride as a gambler. During their poker game, D'Arby didn't hesitate to taunt Jotaro through harmless commentaries during their poker to better rub his first victory in his face. However, when the pressure of having to gamble information on The World while Jotaro erased any certainty about his hand proved too much to handle, D'Arby went mad. D'Arby's pride in his skills also translates in him amassing the souls of his victims as poker chips and collecting them in a book to admire them later.

D'Arby seems to hold some pride in his family name, making the effort of spelling it to the Joestar group and being angered when Joseph Joestar persists in calling him by the wrong name (which would be perceived as a grave insult to Japanese audiences), though this may have been part of his plan.

D'Arby's Stand is Osiris, of the power to extract a target's soul when they sense defeat, typically after a game or bet with him; after which it is compressed as one or more casino tokens.

D'Arby is understandably agile with cards

Gambling and cheating: With a flair for deception, D'Arby is a skilled professional gambler, confident in his ability to prevail in any type of game, with his forte being poker. D'Arby has an exceptionally keen mind when it comes to cheating. He not only made sure that a whole bar was rigged in his favor when he played against the Joestar Group, but could also think of a way to cheat on the spot when playing against Joseph.

Sleight of Hand: D'Arby has exceptionally fine motor skills and sense of touch, enabling him to perform cardistry. He is nimble and precise to the point that he can figure out which page of a book he is on just by touching it with his fingers, and he's able to recall the exact order of cards in a deck after shuffling it. D'Arby performs card tricks masterfully, with Jotaro being able to spot his second dealing only through Star Platinum's enhanced perception.

D'Arby is a man who seems to have a predatory desire for tricking people into his seemingly innocuous games just to steal their souls with his Stand. He then begins goading the loser's friends and family to try winning back the soul, giving him even larger winnings. With this, he has collected several souls, including those of the Moor Family. He shares this interest in collecting souls with his younger brother, Telence, though D'Arby has no interest in keeping the souls conscious in captivity, instead of having them in a deep sleep inside his collection. In addition, his collection is meticulously detailed, with every soul's name listed, as well as area and date of capture.

At some point in the past, D'Arby had tried to hit on his brother's girlfriend, prompting Telence to savagely beat him up. D'Arby would never challenge Telence due to his ability to read minds.

D'Arby's initial appearance, asking the Stardust Crusaders that he knows where DIO's Mansion is

The Joestar group encounter D'Arby while searching Cairo for DIO's mansion. After asking around in a cafè he is sitting in, D'Arby tells them he knows the location of the mansion, but refuses to share the information for money. Instead, he tries to convince the group to try winning the information from him in games of chance. He first quickly sets up a game to see which one of two pieces of beef a nearby cat would take first. An impatient Polnareff accepts his bet, as well as the condition that Polnareff bets his soul in return, thinking it is all nonsense. D'Arby wins the bet and takes Polnareff's soul with his Stand, Osiris, as well as revealing himself to be one of DIO's men and the owner of the cat involved in the game.

Because of his Stand's nature, the Joestar group had to beat him at his own game to win back their friend's soul. Joseph tries outsmarting D'Arby in a game where they put coins in a glass of liquor until someone loses by causing the glass to spill over, but D'Arby turns out to be the better cheater thanks to a piece of melted chocolate under the glass.

Jotaro takes on D'Arby in a game of poker

Jotaro then challenges D'Arby at poker, which the gambler comments on is his strongest game. After Jotaro foils his attempt at second dealing by breaking his finger, D'Arby is visibly shaken and declares that he is no longer fighting for DIO, but for his pride as a gambler. He splits Polnareff's and Joseph's souls into five chips each for them to use. They then get a nearby boy to deal the cards for them. Jotaro loses with his pairs of eights and nines to D'Arby's queens and jacks. As it turns out, D'Arby has the entire café and "everyone within a stone's throw of it" on his payroll. He confidently tells himself that no matter who Jotaro picks to deal the cards, he will only get bad hands.

In the second round of the game, Jotaro refuses to look at his cards, saying he will play with the ones he has. D'Arby is disturbed, but dismisses Jotaro's decision as a cheap bluff. However, Jotaro then keeps D'Arby with his remaining "soul chips", as well as Avdol's and Kakyoin's souls, without a single twitch. This, along with Star Platinum fetching Jotaro a cigarette and a drink without D'Arby noticing at first. D'Arby's thus begins to wonder if Jotaro could have used his Star Platinum to cheat and switch the card. Despite his own four of a kind, kings, D'Arby is nervous about the outcome of the game.

D'Arby decides to accept Jotaro's challenge and tries to call, but then Jotaro raises his mother's soul, demanding D'Arby meet his raise with information on DIO's Stand. This causes D'Arby to panic, knowing that if he were to tell, DIO would have him killed for betraying him. D'Arby tries to force himself to call Jotaro's bet, but he falls apart completely and becomes a hysteric mess, admitting defeat in his heart. Polnareff, Joseph and the hundreds of other souls D'Arby had collected over the years are freed from his collection.

After D'Arby's defeat, Jotaro mentions how strong of an opponent he was, and that they were lucky to defeat him as he could've beaten all four of them.

D'Arby does not cheat all in said game and no explicit mention is made of his Stand, nor does he go insane after being beaten.

D'Arby appears as one of the ten characters from the JoJo's Bizarre Adventure franchise who appears on the game.

D'Arby , along with his cat and his Stand, makes a cameo in the game's continue screen, asking if the player wishes to continue (In the English locale, he asks 'Continue?' while in Japanese, 'Game no tsuzukeru ka?'). If the player lets the timer run down, Osiris takes their soul away compressing it into a poker chip. In the updated game and HD rerelease, D'Arby appears on the main menu. When the player selects a mode or when they continue, D'Arby shouts his signature phrase, "GOOD!"

In the PSX version's Super Story Mode, D'Arby is encountered as a boss with three different minigames, all of them the same as the manga. the first two games are rigged as they were in the manga, so the player will always lose, but the Poker minigame allows the player to win once they unlock and choose the "Bluff" option.

However, if the player replays the minigames via the Boingo Book menu, this time the player can win said minigames to see optional different endings, and can also win the poker game legitimately by forcing D'Arby to run out of coins to bet with.

D'Arby appears in the game as the host of the game's Customize mode. His taglines are available for use in Player Cards as well. He also appears as a support character in Campaign mode. When he appears, he challenges the player to pick a card from a set of ten. 9 of them have D'Arby on them whilst one has Iggy on it. Getting a D'Arby card will give the player a support item for free whilst getting an Iggy will get the player nothing.

D'Arby appears in the game's Story Mode twice, both of which are in Morioh. His first appearance sees him taking the soul of Jotaro's future daughter, Jolyne Cujoh, in a game of heads-or-tails before Jotaro could stop it from happening, in an act of revenge for his previous humiliation by him. Jotaro then defeats D'Arby in a poker game, forcing him to relinquish Jolyne's soul before disappearing. He later reappears back in Morioh, now holding a Saint's Corpse Part thanks to Heaven Ascension DIO. Defeated by Jotaro once again, he gives his corpse part to Jotaro and tells him that the only other person who knows DIO's weakness is Enrico Pucci, before disappearing once again.

D'Arby appears as an NPC before each match, as he tosses all the powerup tokens and player tokens on a map to determine everyone's starting position.