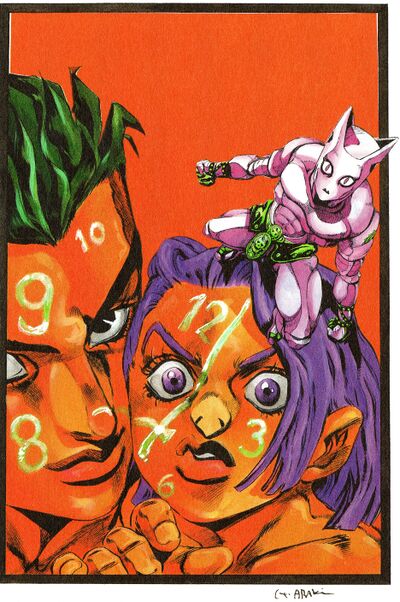 It narrates Hayato Kawajiri's desperate attempt at escaping from Yoshikage Kira's new power Bites The Dust, which uses Hayato as bait to assassinate the Josuke and the others while rewinding time.

Kira, having lost his temper and killed Hayato, is in a panic, realizing that he will not be able to cover up the boy's death from those investigating him. In his desperation, he is suddenly pierced by the arrow his father carries. The next morning, to his father's confusion, he is perfectly calm, believing that he can no longer be harmed by anyone.[1]

Kira gloats to Hayato (revived by Bites the Dust) over his new ability, revealing his true name in the process, as well as the fact that his ability is "invincible." Hayato deduces from this that there are others with similar abilities. Immediately after Kira leaves him, Rohan Kishibe, who has seen him following his father to the train station, uses the power of Heaven's Door on him to learn the identity of his father. Rohan becomes the first to fall victim to Killer Queen's Bites the Dust ability. Hayato then wakes up in bed again and realizes that he is trapped in a time loop.[2] On this morning he avoids Rohan, but is only able to watch him die from a distance as Kira explains the effects of his Stand. He tries to avoid Josuke and company, but is accosted by them and tries to hold Bite the Dust off by killing himself. However, Bite the Dust activates, this time to protect him, killing Josuke and his friends.[3]

Waking up in his bed again, Hayato realizes that he can only rely on himself to unmask Kira. He steals Stray Cat, hoping to use his knowledge of the morning's events to defeat Kira at close range.[4] His attempt nearly succeeds, but Kira is protected from Stray Cat's air bullets by a watch in his pocket.[5] As Kira gloats, Hayato is saved when his secondary plan causes Josuke Higashikata and Okuyasu Nijimura to arrive in time to hear Kira reveal his own name. When Josuke attacks him, Kira is forced to recall Killer Queen to protect him, canceling the effects of the time loop.[6]