CDDH Chapter 1
“
It circled the sky like an astute observer, trying to note every event that happened below.
”
—Ryoko Kakyoin, CDDH Chapter 1: Crazy Diamond's Demonic Heartbreak #1

It is a mysterious parrot that was raised together with Pet Shop. In 1999, Petsounds is stolen from its cage in Cairo, Egypt and ends up in Morioh, Japan. The parrot possesses a Stand, that as of the most recently released chapter remains unnamed in the story, that has the power to make others experience and reenact its own memories.

Petsounds is large with a strong, curved beak and clawed feet. It wears a falconry hood covering its eyes with small gems, adorned with bells and feathers on top. It also wears a long striped scarf around its neck.

Petsounds would frequently circle the skies of Egypt observing people below. It is targeting Hol Horse for unknown reasons, possibly because it does not want to be captured by him. It was trained to hunt like Pet Shop and thus can be ruthless, forcing an innocent victim to run over several pedestrians on the street using its Stand ability.[1]

Petsounds's Stand is capable of recording events in punched cards and inserting them into someone's body. The victim's body is then forced to reenact the event, essentially parroting what happened. 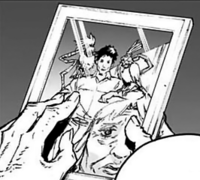 A photo of the parrot with its trainer and Pet Shop

Petsounds was raised and trained by a bird trainer, alongside a falcon named Pet Shop. Its trainer attempted to escape from DIO's grasp and was murdered.[2] After that, it was raised by its owner's mother.[1] However, it is revealed that Petsounds was also trained by DIO.[3] In March 1999, Petsounds is stolen by Kazuki Karaiya from its cage in Egypt and is taken to Morioh, Japan. Karaiya gives Petsounds a piece of his earlobe, linking their souls together and making them share the same Stand.[2]

While Hol Horse is searching for the parrot and Boingo around Budogaoka, the parrot uses its Stand on a man driving, forcing him to reenact the scene of Wilson Phillips running over pedestrians on the sidewalk. Hol Horse is also affected by the ability and starts hearing DIO's voice from the event. The car almost crashes into Hol Horse until Josuke intervenes.[1] Meanwhile, the parrot watches Josuke and Hol Horse from afar, perched atop a tree branch.[4]

The parrot follows Hol Horse to the Budogaoka Police Station, standing on top of nearby power lines. It activates its Stand on Hol Horse, inserting punched cards into his body. Hol Horse's body is then forced to reenact the scene of him about to shoot DIO from ten years ago, except this time he points Emperor to the back of the police inspector's head.[5]

After Hol Horse manages to escape from the attack and leave the police station, the parrot targets several pastry chefs, making them reenact the actions of women who sacrificed themselves to be DIO's food. The women attack Hol Horse, as the parrot and a mysterious figure spy on him from afar.[6] Josuke hears Hol Horse being attacked, and rescues him from the chefs.[3]

Later, when Hol Horse and Josuke are hiding in a subway station, Petsounds controls all the people in the subway and makes them re-enact the actions of protesters fleeing from an Egyptian dictator's army.[7] However, Josuke and Hol Horse both manage to break free of Petsound's ability. Hol Horse fires two bullets with Emperor. The bullets phase through the illusionary helicopter and zoom past Josuke, blowing off the enemy's ear and a fragment of his crossbow. Petsounds starts flying away, momentarily distracting Hol Horse and Josuke which allows the enemy to run away. Josuke uses his Stand to punch the fragment that fell off the crossbow. He thanks Hol Horse for leaving some evidence behind which would allow him to track the enemy down and tells Hol Horse to go after the parrot. Hol Horse recalls when Petsounds's owner told him that she thinks of the parrot as her own son. Thinking that the owner wouldn't want her "son" to cause several casualties, Hol Horse shoots Petsounds, blowing off one of his wings. He mutters an apology to the old lady, upset that he broke his promise with a woman.[8]

However, it turns out that Petsounds is fine. Petsounds reappears on Kazuki Karaiya's shoulder and it is revealed that Karaiya is the true mastermind behind the chaos caused by Petsounds. Petsounds uses his power on Koji Kiyohara, the crossbowman whom Josuke arrested.[9] Later, Petsounds manages to find and use his power on Ryoko Kakyoin, who leaves Tohth on the ground for Karaiya to find.[10]

Karaiya eventually uses Boingo as bait to lure Josuke into a trap. Petsounds then activates its Stand and puts Josuke and Boingo under its control. Suddenly, they appear to be in Egypt. Josuke is surprised because he thought his first overseas trip would be somewhere like Guam or Hawaii. He also points out that the parrot's ability to replay its experiences keeps getting more realistic and might be stronger because Petsounds is closer to them than before. Josuke continues hearing DIO's voice and is creeped out. When Josuke and Boingo turn around, they see DIO with Petsounds on his shoulder. Petsounds is replaying the memory of when its original owner was murdered; DIO commanded Pet Shop to kill his owner for trying to run away. Just like the memory, Pet Shop fires ice spikes at Josuke. The ice phases through Crazy Diamond's hand and pierces Josuke through the chest. Although it's an illusion, Josuke still feels the pain of the man who was murdered.[11]