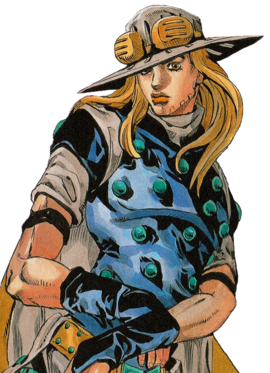 Out of combat, Gyro also possesses an eccentric personality and is particularly bombastic. Gyro has a penchant for gags, involving puns or an inexplicable brand of humor from bad puns[20] to skits defying all logic,[21] frequently telling such jokes to Johnny in the spur of the moment and created a song about cheese, singing it to Johnny and being happy that he appreciated it.[22] He also has a fondness for dramatic gestures and quotes, saying that the Goddess of Victory was riding with him and that she would retract her favor if he ever let another woman ride with him. Unlike Johnny, Gyro frequently grins, exposing his metal teeth in the process.[23] The mere fact that he engraved his teeth with the message "Go! Go! Zeppeli" already exposes his ostentatious nature.[23] Humorously, Gyro also keeps a pink teddy bear with him, being fond of it enough to keep it even during the Steel Ball Run,[24] although he leaves it at one point. However, mimicking his own father, Gyro can be stern and dignified when he talks about the Zeppeli Spin technique.