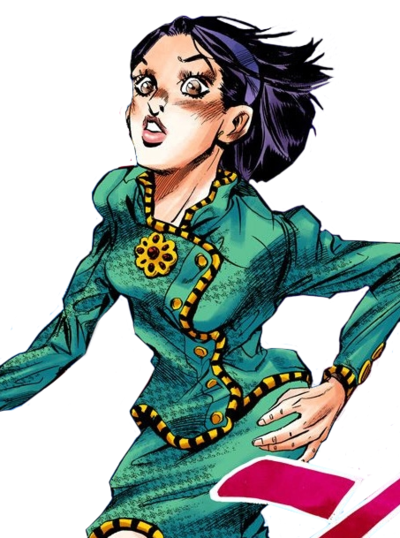 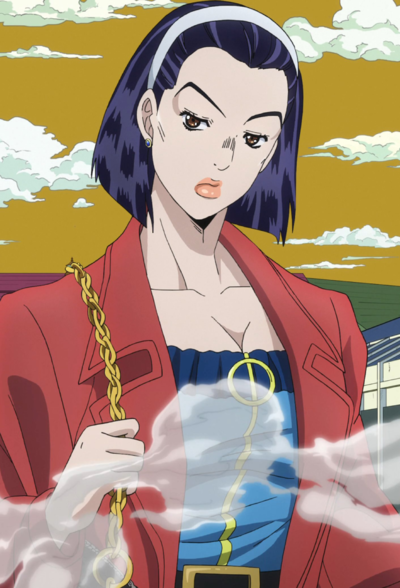 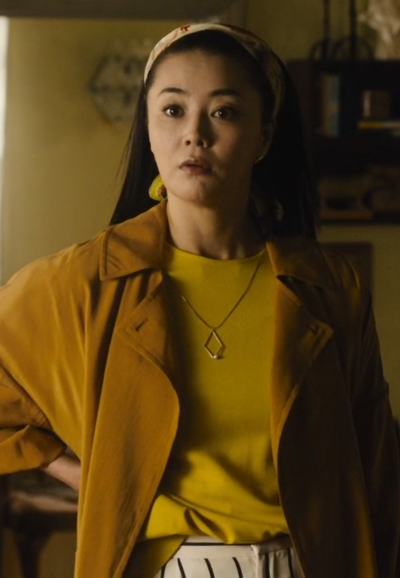 “
I hope Josuke's behaving himself. He just got into high school. I really don't get that brat sometimes. But, he is really tender and gentle deep down, so I guess I shouldn't worry so much.
”
—Tomoko to Ryohei Higashikata, Chapter 268: Jotaro Kujo! Meets Josuke Higashikata, Part 3

Tomoko is a woman of seemingly average height and slim to medium build. She has a variety of outfits throughout the part with some consistencies, she usually has straight chin-length dark hair, wearing a hairband and earrings.

She is described by many male characters as being overly attractive.

When Jotaro visits looking for Josuke, she breaks into tears and hugs him as she thought he was Joseph, whom she remains in love with. It is not known whether she knew he was married during their romance. She loves her family dearly, as evidenced by the close relationship she has with her son and had with her late father. She can also be strict with Josuke, as she froze his account when she found out he earned 1.33 million from a shared 5 million with Okuyasu and Shigechi. She understood that Josuke would spend it all if she didn't, and began saving it for his university funds.[6]

She is fond of a particular sponge cake from Kamakura.[7]

When afraid, Tomoko tends to swallow her own saliva.[7]

Sometime before the events of Stardust Crusaders, Tomoko had a relationship with Joseph Joestar while still in university. The 62-year-old man, however, was married to Suzi Q at the time, and so Tomoko didn't tell him that she was pregnant with his illegitimate child, Josuke, of which Joseph had knowledge of only when the boy was 16.[8] 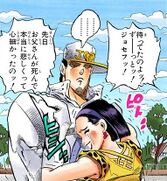 Tomoko is introduced as a short-tempered woman, assaulting a man who catcalled and then offered a ride to her. She avoids any consequence for it since the policeman who passes by is her father Ryohei. Meanwhile, Josuke solves a hostage situation and makes an enemy of Anjuro Katagiri, a violent murderer who's recently acquired the water Stand Aqua Necklace. The next day, Anjuro disguises himself as the milk delivery boy and tries to give a bottle with Aqua Necklace inside. However, Tomoko notices that her bottle has been opened and asks for another one. Anjuro sends Aqua Necklace through the water pipes and Tomoko drinks the Stand without noticing. Josuke does notice it and punches through her with Crazy Diamond. That way Josuke can capture the Stand without hurting his mother. Later, Aqua Necklace manages to kill Ryohei. The whole family mourns Ryohei and Tomoko is convinced to get out of the house for several days. Josuke and Jotaro are then able to defeat Anjuro for good.

Later, Tomoko then receives the visit from Jotaro Kujo, whom she mistakes for Joseph and hugs. In tears, she confesses her love for him but backs off bewildered when Jotaro lets her down that he isn't Joseph. She takes a long time to change Ryohei Higashikata's bedroom, depressed about his death by a stroke (which was actually the doing of Aqua Necklace).

One night, Tomoko is seen pestering Josuke so that he does his homework. She repeatedly kicks Josuke while he's playing at video games to make him lose. She gets out just before Red Hot Chili Pepper comes in. Later, Josuke wins 1.33 million yen with Okuyasu Nijimura and Shigekiyo Yangu. Tomoko freezes Josuke's bank account so that he saves the money for his studies.

Later on, Tomoko is attacked by Terunosuke Miyamoto, who invades her house and turns her into paper with his Stand, Enigma, after seeing her sign of fear (swallowing her saliva). Terunosuke then used her to see Josuke´s sign of fear, but was defeated by Josuke and Yuya Fungami and Tomoko was saved.

In the Part 4 anime, Tomoko Higashikata was originally voiced by Megumi Toyoguchi, who previously voiced Nena in the 2001 Stardust Crusaders OVA and Hot Pants in Eyes of Heaven. However, from DU Episode 31 and onward, in the end of 2016, Toyoguchi announced that she was married and pregnant, and had to be switched out due to maternity leave. Tomoko's role was filled in by Shizuka Itō.[9]