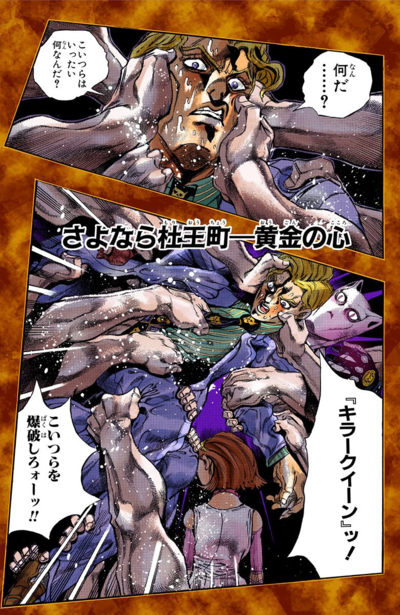 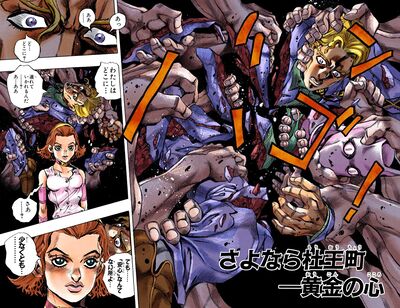 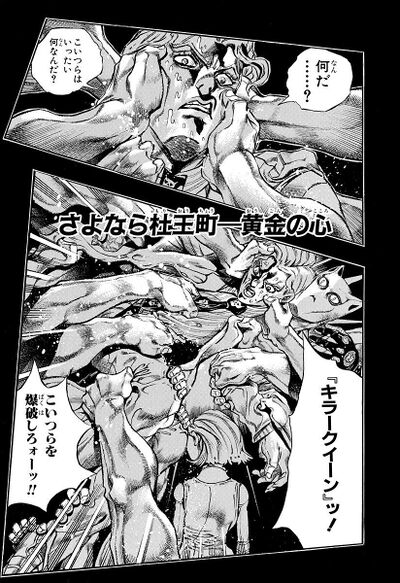 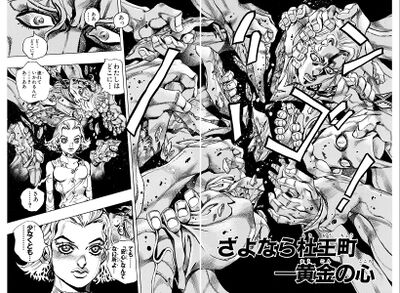 Goodbye, Morioh - The Golden Heart (さよなら杜王町－黄金の心, Sayonara Moriō-chō - Ōgon no Kokoro), originally Golden Spirit! (黄金の精神！, Ōgon no Seishin!) in the WSJ release, is the one hundred seventy-fourth and final chapter of Diamond is Unbreakable and the four hundred thirty-ninth chapter of the JoJo's Bizarre Adventure manga.

Meanwhile, Shinobu patiently awaits for her husband to return home while Hayato cries during dinner, knowing his father will never return. Despite this, he tearfully assures his mother that he will also wait for his father to return. The narrator explains that Morioh regained its peacefulness, all while lamenting Kira's victims and wondering if the damage done will breed a new killer or if Morioh will recover even stronger than before.

Later, Jotaro and Joseph are about to leave Morioh by boat. Joseph wonders if there are other killers out there like Yoshikage and if Jotaro is worried about leaving. Jotaro expresses that he is slightly concerned, but his grandfather reassures him that Josuke and the others all have a golden heart and spirit - a sense of unwavering justice, just like Jotaro did back in Egypt. He then remarks that as long as they carry this golden spirit, Morioh will always be safe and their spirits will be passed down to the next generation. Josuke then arrives on the docks to say goodbye to Jotaro and his father, asking him if he still has the picture of Tomoko Josuke gave him in his wallet. Joseph remarks that he indeed does still have it, which prompts Josuke to reveal he snatched Joseph's wallet. Josuke assures Joseph that he will keep the picture safe so his wife doesn't find it, also remarking that he'll keep Joseph's cash as well. As Joseph fumes and Jotaro remarks on Josuke's "golden heart", Josuke says goodbye to the duo while striking a pose.

Author's Note
“
A little lizard died in my house. I think I stepped on it after it came in from outside. Forgive me!
”
—Hirohiko Araki
“
家の中でチビトカゲが死んでいた。外から入って来たのをふんづけたらしい。許して！
”
—Hirohiko Araki