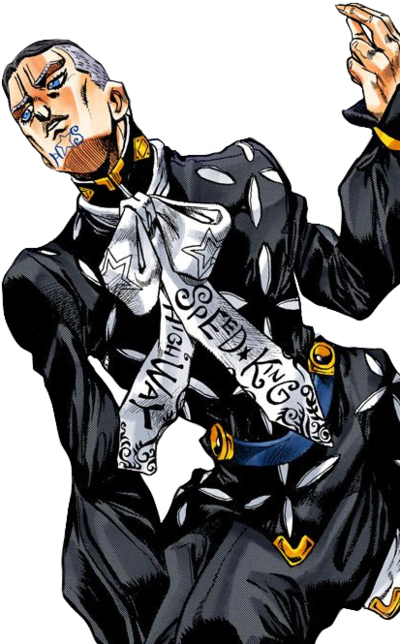 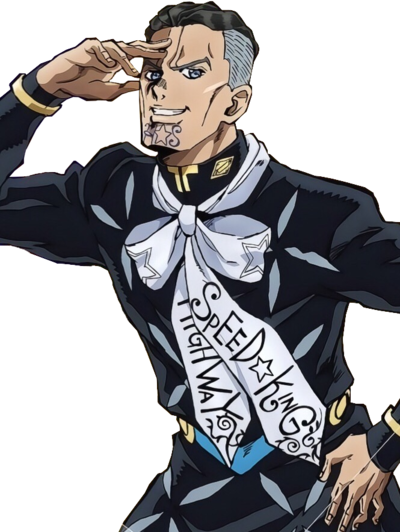 Like Josuke, Okuyasu, and Mikitaka, Yuya wears a dark, modified school uniform. His uniform's torso has a pattern on the front and back, two golden pins on each collar and a belt over the torso with two gold buckles on the both sides. He wears a long, bouffant, light bow tie with the words "Highway" and "Speed King", possibly a reference to the Deep Purple song Speed King.

Yuya Fungami was a member of an unnamed biker gang. Two days prior to his appearance in the story, Yuya Fungami suffered a severe motorcycle accident as he was racing across the Twin Pines tunnel. Yuya was brought to the Budogaoka Hospital in, with his spine and all four limbs broken. At one point, he was pierced by Yoshihiro Kira with the Bow and Arrow and acquired a Stand ability. 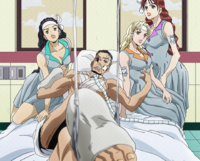 Wanting to heal faster, Yuya uses his Stand Highway Star to absorb the nutrients and energy from unsuspecting people. The Stand makes its first appearance by luring a manga author, Rohan Kishibe inside of a hallucinatory room. When Rohan investigates, it begins its attack as Rohan scrambles to get away on his motorcycle. Despite his speed, Highway Star catches up and latches onto Rohan, dropping him from the motorcycle and slowly draining him of his life force. Highway Star drags him back to the room but fortunately for Rohan, Josuke Higashikata arrives to the scene to investigate the tunnel alongside him. Through Highway Star, Yuya tempts Rohan into luring his most hated acquaintance into the room in exchange for freedom. Rohan makes a declaration refusing his offer out of principles. He warns Josuke about the Stand's ability and demands the user's defeat. Back at the hospital Yuya recovers rapidly from the life force sucked out of Rohan. After not being able to breathe properly Yuya was now able to speak to his fangirls. 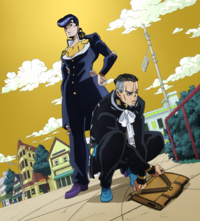 When Koichi is kidnapped by Terunosuke Miyamoto, Josuke visits Yuya to ask for his help, and offers to heal him. Although Yuya remains spiteful about their last encounter, he cannot pass up the opportunity to be healed. Without his looks, his fangirls have seemingly left him. With Crazy Diamond, Yuya is now completely healed and open to help out Josuke. His fangirls return suddenly, shocked to find him fully recover, and he takes a little bit of time to boast about his sense of smell to them.

Yuya unfolds the entire paper and it releases a shredder that's going to kill Josuke and Koichi. Unable to break the machine or pull the papers, Yuya shows his fear tell allowing Miyamoto to finally turn him into paper. Yuya expected this though and uses his transformation to fit his hand into the shredder pulling out both Stand users. When Miyamoto threatens to rip Yuya's paper, Koichi's Echoes weights his hands and immobilizes him. Josuke and Koichi defeat Miyamoto and turn him into a book, releasing Yuya from his trap.

Yuya appears in Diamond Records as a playable character in both the Action Battle and Tactical Battle game modes. He has a variety of unlockable statues varying between the 'Unity', 'Courage', and 'Tactical' types, ranging from 3 stars to 6 stars. His 'Tactical' type statues are only playable in Tactical Battle. Yuya's moveset in both game modes is comprised of various attacks inspired by the anime, using his stand Highway Star.
Moveset

Yuya's basic attack string is a combination of up to five various attacks from Highway Star. In Tactical Battle, this is cut down to only three hits.

Highway Star strikes the opponent with both hands, leaving an effect that deals damage over time.

Highway Star unleashes a barrage of punches on opponents, ending with an uppercut. (Unlockable)

Yuya uses pieces of Highway Star as a projectile to launch at opponents.

Yuya captures an opponent with a small fraction of Highway Star, which then fully forms to attack the opponent again. 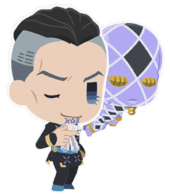