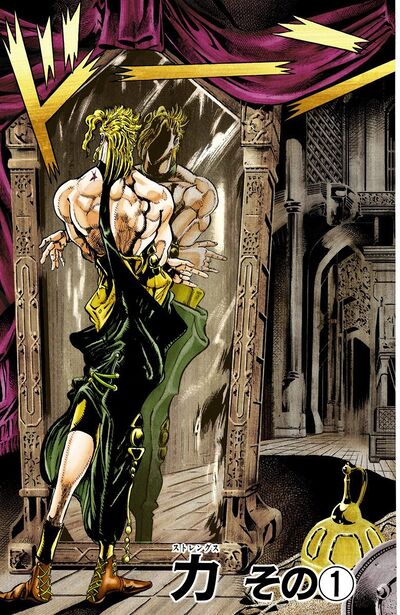 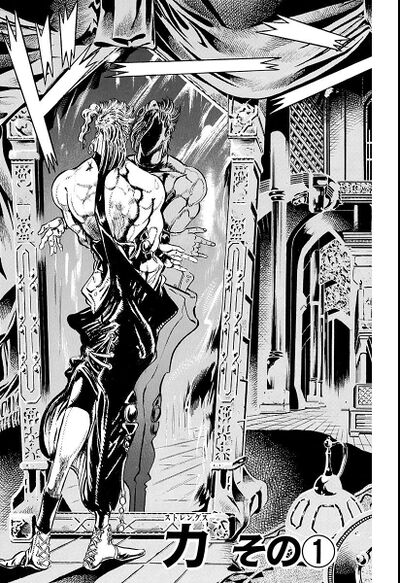 Strength, Part 1 ( その①, Sutorengusu Sono 1), originally The Unmanned Ship and the Ape (無人船と猿, Mujinsen to Saru) in the WSJ release, is the seventeenth chapter of Stardust Crusaders and the one hundred thirtieth chapter of the JoJo's Bizarre Adventure manga.

DIO has a conversation with Enya about what it means to survive. DIO believes that in order to survive, one must eventually end up on top. For this to happen to him, he needs to get rid of the Joestar Family. Enya assures DIO that the seven hired Stand users, representatives of the Tarot Cards, will defeat the Joestars. DIO calls Enya strange and asks what exactly she wants for helping him. She simply states that she thinks DIO is interesting and wants to continue observing his life.

Jotaro's group has just defeated the Dark Blue Moon Stand, but have had to evacuate the ship alongside some of the crew members, since the fake captain had planted explosives on it before he died. On the raft, Anne begins to question Jotaro's group, asking who they are, but the conversation is cut short as a giant ship named Big Daddy suddenly appears out of nowhere and parks near the raft they are in.

The stairs lower to let them on, but Jotaro is cautious, as there doesn't seem to be anyone on the ship to greet them. Polnareff eventually persuades them to board anyway, but they find that the ship is completely void of life. They do, however, find a lone orangutan locked in a cage in the lower decks. They decide to keep searching for the people who take care of it. However, upon entering the deck of the ship, one of the crew members that was with Jotaro's group is suddenly impaled by a hook.