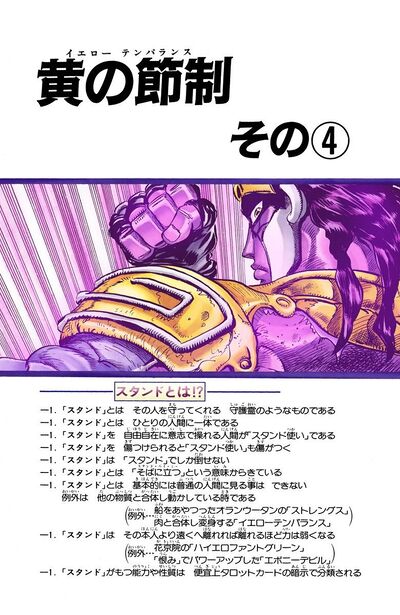 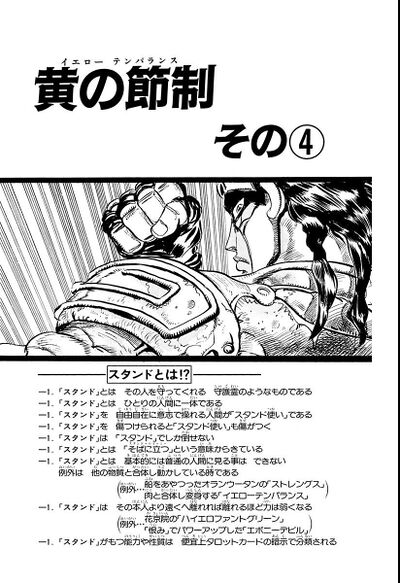 Rubber Soul begs for Jotaro to spare him. In exchange for this, Jotaro asks him about the other Stand users coming after the group, but Rubber Soul refuses to sell out his comrades and hurt his pride. Jotaro congratulates Rubber Soul for being a good and honorable man and prepares to beat him more, but the enemy quickly changes his mind and tells the four Tarot Cards the other Stand users represent: Death, The Emperor, The Hanged Man, and The Empress. Jotaro demands information on their powers, to which Rubber Soul says that no one shows his Stand power to anyone, even if they are fighting on the same side. He does, however, inform Jotaro that a prophet told DIO everything about the Stands and that her son, the man with two right hands, is Sherry Polnareff's killer and the representative of the Tarot Card the "Hanged Man". Rumors say that his Stand uses mirrors.

Rubber Soul uses Jotaro's distraction to attack him with Yellow Temperance through a manhole, which connects itself to a waterhole. He grows even bigger, assimilating lobsters and boasting about his luck. Jotaro decides to show him "his true luck" by blocking the water hole with his fist, which sends the water pressure back at the manhole and Rubber Soul, which is sent flying back at the water. He begs Jotaro for mercy once again, explaining that he was just joking. Jotaro, speechless, simply says how pathetic Rubber Soul is and pummels him with a barrage of "ora" punches from Star Platinum.

Now inside a train going to India, the group discusses if Anne is with her father and how lonely they will be without her. The real Kakyoin wonders how someone managed to disguise themselves as him and asks for Jotaro's cherry. When he picks it up, he starts licking it while making "rero" sounds. Bothered by how Rubber Soul did the same thing earlier, Jotaro remains silent. In the background, Anne is shown sleeping on the train, having sneaked on to follow the group.

Author's Note
“
On the way to the Anime Convention in Sendai, I spent a few days relaxing at my parents' house. It was my first vacation in a long time.
”
—Hirohiko Araki
“
で仙台に行き、実家で２、３日ゆっくりしてきました。久しぶりの休日でした
”
—Hirohiko Araki