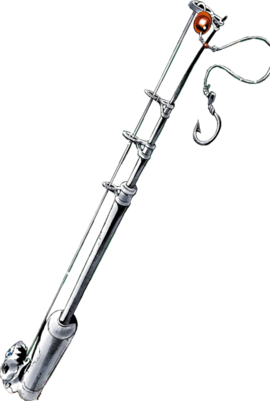 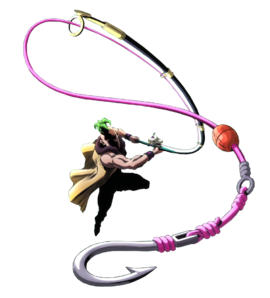 Destructive Power
C
Speed
B
Range
B*
Stamina
C
Precision
C
Developmental Potential
A
A
B
C
D
E
*(Range: The length of the string)
A: Very Good
B: Good
C: Average
D: Poor
E: Very Poor
“
There's nothing you can do but wait until Beach Boy's hook crawls up your arm and snags your heart!
”
—Pesci

Beach Boy (ビーチ・ボーイ, Bīchi Bōi) is the Stand of Pesci featured in Vento Aureo. Taking the form of a fishing pole with a seemingly endless line that Pesci can control completely, its abilities of damage reflection and life energy detection make it both a powerful weapon and a useful tool.

Beach Boy sports a grey metallic color in the digitally colored manga, while the TV anime presents it as a dark blue rod and pink line.

The series is known for alternating colors between media, the information presented below may or may not be canon.
Rod(Silver and dark gray)
Line(White)
Float(Tan-orange)
Rod(Light gray and black)
Line(White)
Rod
(Teal and black with gold segments, white skull)
Line(Pink)
Float(Coral)