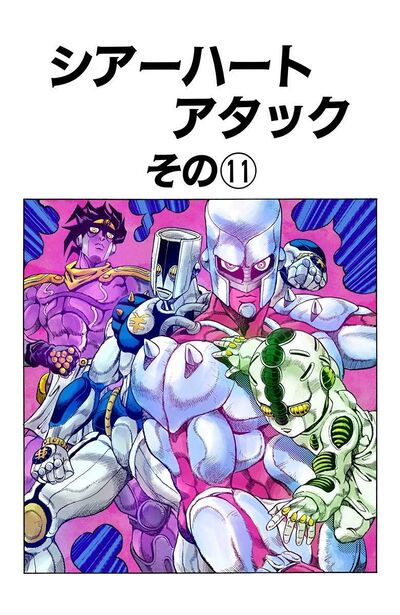 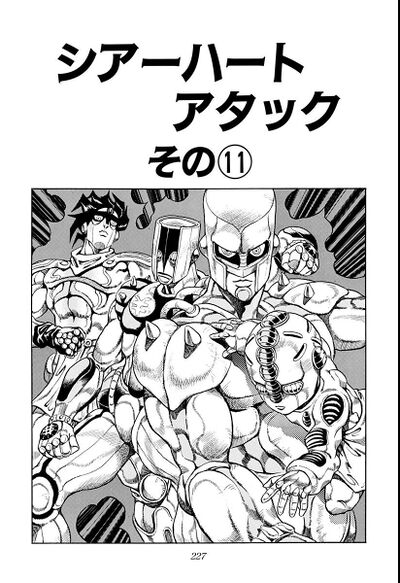 Sheer Heart Attack, Part 11 (シアーハートアタック その⑪, Shiā Hāto Atakku Sono 11), originally Into the Crowd...! (雑踏の中へ…！, Zattō no Naka e...!) in the WSJ release, is the ninety-ninth chapter of Diamond is Unbreakable and the three hundred sixty-fourth chapter of the JoJo's Bizarre Adventure manga.

Kira is now stumbling in the streets and meets his colleagues, greeting them with his stump of a hand. Meanwhile, Koichi explains to Jotaro, Josuke, and Okuyasu what he knows about Yoshikage Kira and his Stand Killer Queen while everyone is following the hand. It eventually enters a shop, revealed as Aya's Cinderella beauty salon, and when they enter it, they see Kira's clothes lying on the ground, plus the corpse of Aya and another person.

That person, still having their left hand, is not Kira, but is missing a face. The agonizing Aya reveals that Kira has barged in the salon with someone and forced her to switch their face, but before she can describe it, Aya explodes. Koichi sees the hand going through another door and everyone follows it, but they end up in a street full of salarymen. They lost the hand and are unable to localize Kira anymore, who is assuming a new identity.

(Cover only)
The Hand