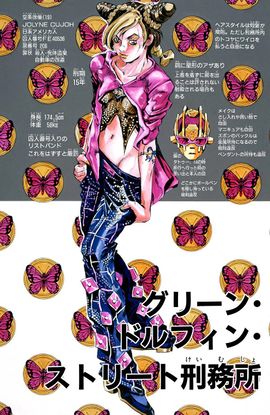 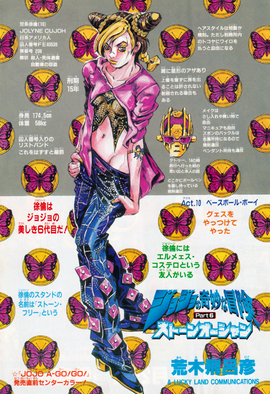 At the prison phones, Jolyne waits to make a call. A prisoner asks her for a dollar to continue her call, and she obliges. When she tries to approach an empty phone, she's knocked back by another prisoner. She's told that the phones are reservation only, and that she will have to wait a month before using one. Gwess approaches her, seeking forgiveness, but Jolyne wants nothing to do with her. Gwess warns her about giving away money, and says that giving away even a dollar is enough to damage Jolyne's reputation.

In the prison library, Jolyne confronts the prisoner for her dollar; the prisoner reacts defensively. After being asked for more money, Jolyne goes to the restroom. It is implied she uses Stone Free to discretely feed the prisoner a crushed coin. The prisoner suddenly develops a bad stomachache, and rushes to the restroom. The prisoner offers to repay Jolyne her dollar for the bathroom, but Jolyne refuses. The prisoner offers to pay her ten dollars, and Jolyne accepts. Jolyne takes the money and helps a timid prisoner get her money back as well. As she walks away, Jolyne spots a baseball roll by, as well as a boy in a Cubs uniform chasing after it. The boy warns her that someone will come to meet her tomorrow, and that she cannot go see him no matter what.