My Dad Is Not My Dad (story arc)

My Dad Is Not My Dad 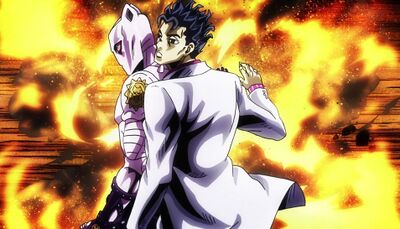 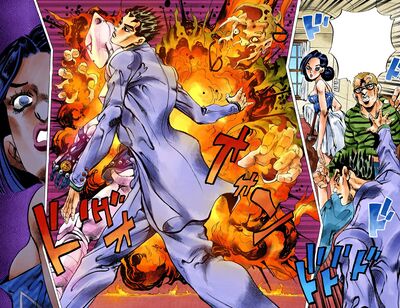 My Dad Is Not My Dad (ぼくのパパはパパじゃない, Boku no Papa wa Papa Ja Nai) is the twenty-fifth story arc in Diamond is Unbreakable.

It narrates the tense investigations of Hayato Kawajiri on his "father", whom he rightfully suspects of being an impersonator and his efforts to avoid being caught and murdered.

On a subway going home from work, Kira reads a newspaper while resisting the urge to murder an attention-seeking girl with her boyfriend. The girl's handbag touches Kira's leg causing him to push it away. The couple ridicule Kira for touching her bag, assuming him to be some type of thief or pervert. Unfazed, Kira gets off at Morioh Station, but not before the two rush past him and knock his briefcase to the floor. The couple makes fun of Kira's bowling pin-shaped nail clippers and leave.

At the couple's studio apartment, Kira barges through the front door and immediately detonates the boyfriend. After aggressively asking for the girl's name (revealed to be Minako), he forces her to cut his nails using the aforementioned nail clippers. He recalls Minako asking her boyfriend for earrings and brings out the boyfriend's severed ears for her to wear. He then detonates all but the girl's hand but is unaware that Hayato is filming the whole thing from the front door. Not soon after, he witnesses Hayato run off with a camcorder in hand. Enraged, he destroys his recently obtained appendage.

Back at the Kosaku household, Kira searches through Hayato's room but is unable to find the camera. Meanwhile, Hayato sits in the bathtub, holding onto the videotape evidence, and contemplates who to report his discovery to. Kira joins him in the bath and suspiciously asks Hayato for the bucket he is hiding the tape in. To prevent him from seeing it, Hayato offers to wash his back, though his "father" deems it more appropriate that he wash Hayato's back instead. Hayato grabs the tape from the bucket and conceals it, at which point Kira eventually reveals that he saw Hayato running off earlier today with the camcorder.

Kira turns Hayato over and, after unsuccessfully trying to find the tape, decides to kill him with a small contained explosion. Hayato reveals the camcorder up on a high ledge, recording the whole situation and announce his knowledge of Kira's cover-up. He then tells Kira that he has numerous proof that he isn't his true father and warns him not to harm his family as the tape is revealed to be hiding under the soap lather on his left leg.[1]