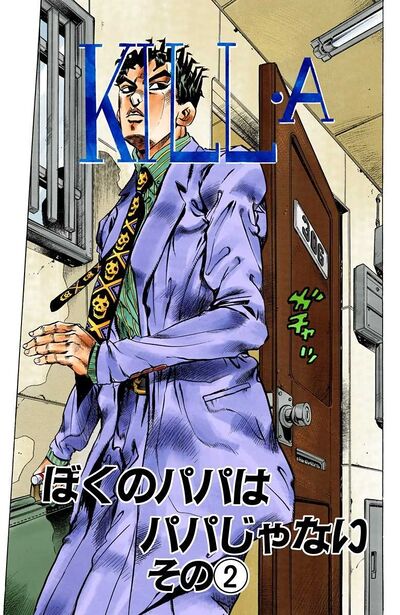 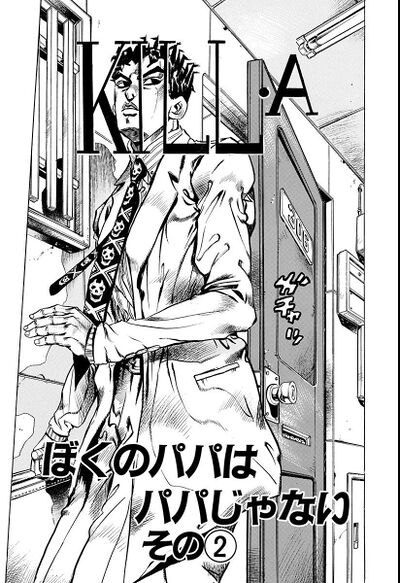 My Dad Is Not My Dad, Part 2 (ぼくのパパはパパじゃない その②, Boku no Papa wa Papa ja Nai Sono 2), originally I've Been Recording You! (ずっとお前を撮っていた！, Zutto Omae o Totteita!) in the WSJ release, is the one hundred forty-sixth chapter of Diamond is Unbreakable and the four hundred eleventh chapter of the JoJo's Bizarre Adventure manga.

Upon leaving the apartment, Kira witnesses Hayato run off with a camcorder in hand, prompting him to destroy his recently obtained appendage. Back at the Kosaku household, Kira searches through Hayato's room but is unable to find the camera. Meanwhile, Hayato sits in the bathtub, holding onto the videotape evidence, and contemplates who to report his discovery to.

Kira soon enters the bathroom to take a bath as well and suspiciously asks Hayato for the bucket he is hiding the tape in. To prevent him from seeing it, Hayato offers to wash his back, though his "father" deems it more appropriate that he wash Hayato's back instead. Hayato grabs the tape from the bucket and conceals it, at which point Kira begins questioning him and eventually reveals that he saw Hayato running off earlier today with the camcorder.

Kira turns Hayato over and, after unsuccessfully trying to find the tape, decides to finally kill him with a small contained explosion. This prompts Hayato to reveal the camcorder up on a high ledge, recording the whole situation and announce his knowledge of Kira's cover-up. He then warns Kira not to harm him or his mother as the tape is revealed to be hiding under the soap lather on his left leg.