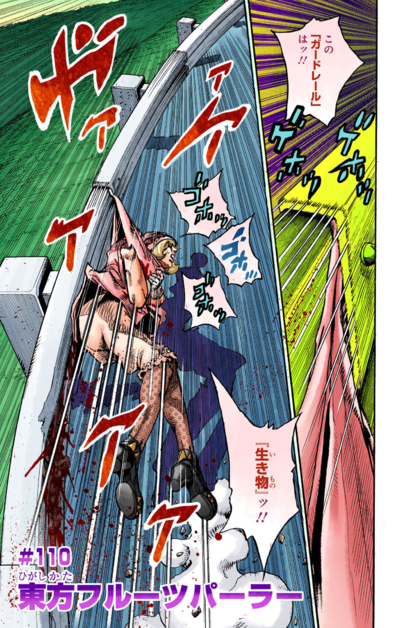 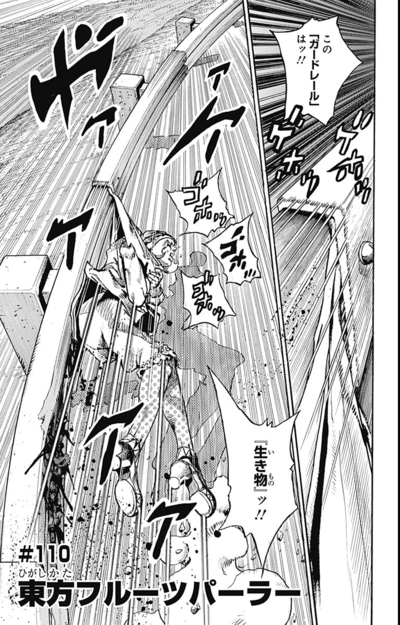 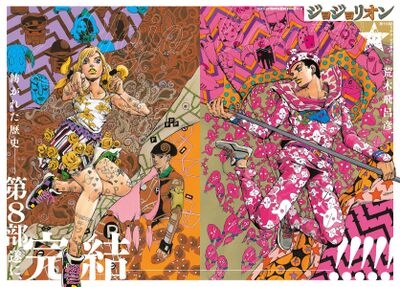 While Fumi's clothes get sucked into the guard rail, Lucy notices the Joestar Birthmark on his shoulder. As Fumi's face comes into contact with Gaga, Lucy tells Fumi that he surely can start the car's engine from where he is, guessing that he must have an ability. Driven to his limit, Fumi takes his geta and throws it at the car, hitting the car's trunk and opening it. Lucy's items burst out of the trunk, and Fumi grabs onto an electric cord. Vines appear around Fumi's arm and he uses the cord to reach the car and start the engine. The car then slams into Radio Gaga. Fumi finds a pair of clackers and wonders what it is. He tosses them aside, preferring to fully unleash his Stand and pummel Radio Gaga. The rail snaps off, and the creature flees, slithering away on the hill. Fumi runs away as well, carrying Lucy on his back.

At Lucy's request, Fumi reveals that his full name is Joseph Joestar, the grandson of Johnny Joestar and Rina Higashikata. As they run, Lucy briefly spots Toru busy digging up two Locacaca trees in the orchard nearby. Lucy tries to shout, but she coughs blood again, distracting Joseph and allowing Toru to disappear without a trace.

The narration reveals that Lucy has died of a lung disease three years after the Radio Gaga incident and that she was unable to return to Japan again. Worried about her health, Joseph accompanied her back to America. However, he was no longer able to return to Japan as the United States entered World War II and the Pacific Ocean route became blocked. Joseph worked as Lucy's assistant, received an education, and earned citizenship in New York. In 1952, he met and then married a woman named Suzi Q in the Speedwagon Foundation, and they had a daughter together named Holy. Meanwhile, the Higashikata Family kept living in Morioh. In 1993, Norisuke Higashikata IV took control of the family and the Higashikata Fruit Company's business prospered. In 2010, their house was rebuilt by Yotsuyu Yagiyama.

Author's Note
“
Thank you very much for these past 10 years of JoJolion! Let's take a bit of a rest, and then meet again with the new JOJOLANDS (tentative).
”
—Hirohiko Araki
“
ジョジョリオン10年間ありがとうございました！少し休んで、新「JOJOLANDS(仮)」でお会いしましょう。
”
—Hirohiko Araki