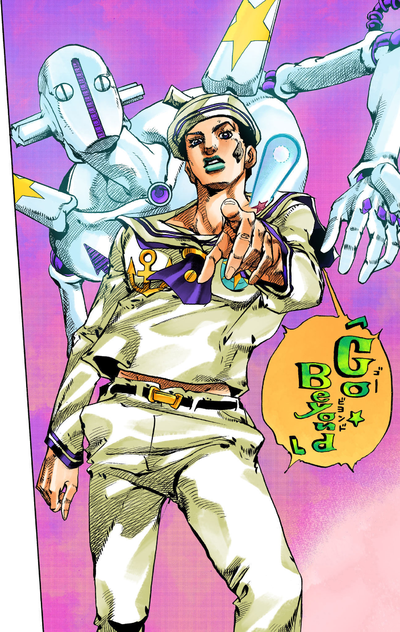 It continues Josuke's fight with Wonder of U and Toru using his new ability Soft & Wet: Go Beyond. Meanwhile, Kaato Higashikata returns back to the estate with a plan to end the curse.

Josuke hears an explanation from Mamezuku about his bubbles. They are small spinning lines that don't exist in the world and can transcend the logic of the calamities. They are also a fusion of Killer Queen's explosive ability and Soft & Wet's bubbles, meaning they can produce an "explosive spin". Josuke fires a bubble at Wonder of U, but the Stand blocks the attack with his cane and unleashes a rock "insect" named Obladi Oblada. The "insect" leeches onto Josuke's body and feeds off his blood to multiply. Josuke attempts to shoot another bubble at Wonder of U, but Obladi Oblada deflects it away. Fortunately, a bubble goes through the phone Josuke is holding and comes out of Joshu's phone via Paisley Park and flies towards Toru.[1]

Toru gets hit by the bubble and is heavily injured. The plane panel changes its direction and crashes into the Higashikata house instead of Yasuho. Meanwhile, Josuke is still covered by the Obladi Oblada's in the hospital. He explains to Yasuho that he needs her to aim the phone at Toru via Paisley Park so he could finish him off before he flees. Yasuho notices that Toru has the last New Locacaca in his mouth and is approaching her to do an Equivalent Exchange. Joshu summons Nut King Call to attack Toru, but he gets knocked out by a rain gutter. At the hospital, Josuke finds the shower room and dives in the pool to wash the Obladi Oblada's off of him. Toru is about to perform an equivalent exchange with Yasuho, but he is hit with another one of Josuke's bubbles. The shockwave sends him flying into the garage, where he sees a crying Kaato Higashikata.[2]

Kaato reveals that she has been living in an apartment nearby and wanted to bring Jobin's favorite cream stew, but Jobin was already dead when she got there. Yasuho urges Kaato not to approach Toru and explains that he recently ate a New Locacaca. After Toru taunts Kaato and her family, she pins down Toru's limbs using her Stand Space Trucking, and reveals she had stored Tsurugi Higashikata between her cards. A flashback shows Kaato's meeting with Jobin in the past, where Jobin explains to her about the Locacaca and the Equivalent Exchange. In the present, Tsurugi is dropped onto Toru from inside the Space Trucking cards, and the equivalent exchange begins.[3]

The family members observe as the exchange occurs. Kaato crushes the New Locacaca branch between her cards and lets the sap flow into Tsurugi's mouth to help the exchange process. Toru gets furious and unleashes Wonder of U on Kaato, but before it can do any damage the Stand disintegrates. Toru tries to plead to Kaato and Yasuho to stop doing this, but he expires and Tsurugi is healed. Unfortunately, Kaato crushing the Locacaca branch counted as an attack, so she collapses on the floor after being stabbed by a pruning saw.[4]

Later, an ambulance and a fire truck arrive at the household. Tsurugi brings Norisuke outside in the body bag and notices his burn wounds from Speed King are minor and that Jobin must have restrained himself. Yasuho suddenly sees the Director crawling towards Norisuke's unconscious body. The Director enters Norisuke and the calamity starts worsening his wounds. Yasuho realizes that the calamity is a natural law of the world, so Toru was manipulating them to his advantage rather than creating them. Fortunately, Josuke arrives at the house and blasts the calamity to bits with Soft & Wet: Go Beyond and reunites with Yasuho.[4]