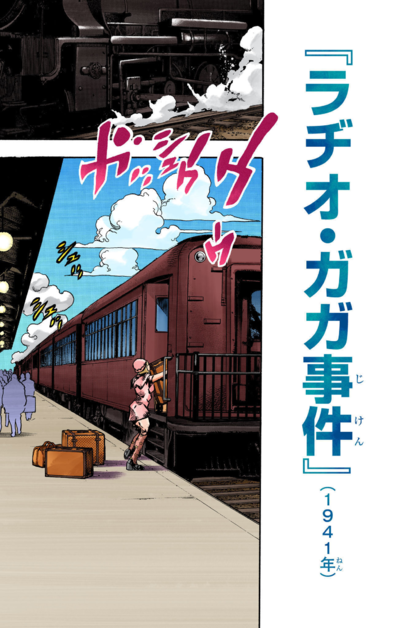 Set in 1941, it narrates Lucy Steel and Joseph Joestar's investigation of the "Radio Gaga Incident".

A flashback to 1941 is detailed. An elderly and widowed Lucy Steel arrives in S-City to investigate a strange place of interest. There, she meets Fumi, who agrees to help her with her investigation after being robbed of his wallet and forced to cancel his date.

Via chauffeur, Lucy and Fumi drive to the hunting grounds, to the spot of the "Radio Gaga Incident", where people seem to act strange near a certain guard rail and mysteriously disappear, took place. As they investigate, their driver starts acting strange. Just like the legend of the Radio Gaga Incident, he walks towards a guard rail, mutters "gaga" and strips himself naked. Then a truck passes by, and he vanishes. Convinced that the legend is true, Fumi tries to urge Lucy to flee, but Lucy refuses, saying that she discovered a mysterious fruit called the Locacaca had been growing in the land similar to the Devil's Palm in America. Suddenly, Lucy starts hearing voices and is lured near the guard rail. Fumi watches and she is sucked into the guard rail, which appears to be alive.[1]

Lucy is saved by Fumi who drags her back to the car, but then the guard rail, Radio Gaga, sends the driver, whom it has kept barely alive, to grab Lucy and pull her in. As the driver pulls Lucy and begs her to save him, Fumi intervenes again and finds himself being dragged towards Radio Gaga instead. As Fumi's clothes get ripped, Lucy sees the Joestar Birthmark on Fumi's shoulder and realizes that he must have a Stand power. She pushes him into awakening it and Fumi makes vines appear on his arm and he is able to start the car's engine. The car then crashes into Radio Gaga, and it slithers away in pain. As Fumi flees the scene with Lucy on his back, he reveals that his full name is Joseph Joestar, a descendant of Johnny Joestar.

The narration then reveals what happens next in Lucy and Joseph's lives, and how Joseph's line ends with Yoshikage Kira.

Back to the present, Josuke and Yasuho find themselves without the Locacaca to cure Holy Joestar-Kira. They run into Kiyomi Kujo, and learn that she has not forgotten about her son. Nonetheless, Josuke feels that he is neither Josefumi nor Yoshikage and doesn't approach Kiyomi. Josuke and Yasuho then head to the Higashikata Fruit Parlor. The family tries to choose a cake for tomorrow to properly celebrate Norisuke being discharged from the hospital, but they are all overcome by emotion. They thus ask Josuke to choose the cake. Seeing that Josuke has found his family, Yasuho leaves the parlor crying tears of joy.[2]