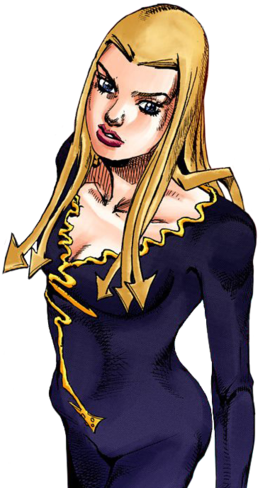 Eyes of Heaven (cameo)
“
Oh, my! Someone dropped a magazine with such a pretty girl on the cover in a place like this?! Gee, I'm sure I've seen this person before some~~where... It's me~ muhuhuhuhu!
”
—Hato Higashikata, JJL Chapter 7: Josuke, Go to the Higashikata Family

Hato Higashikata (東方 鳩, Higashikata Hato) is a side character featured in the eighth part of JoJo's Bizarre Adventure, JoJolion. Introduced early in the story, she gains significance in the "Hato Brought Her Boyfriend Home" story arc and becomes a temporary ally in Walking Heart.

Hato is the air-headed eldest daughter of Norisuke Higashikata IV, and the sister of Jobin, Joshu and Daiya Higashikata. She also works as a model. Hato is a Stand User, whose Walking Heart lengthens her heels, making them into deadly weapons.

Hato is a tall, beautiful young woman with straight shoulder-length blonde hair that ends in either arrow point-style hair accessories or her hair. Her most frequent outfit so far consists of a bodysuit with a laced collar and a spiralling arrow that leads down her chest and points towards her groin. She also wears fancy high-heeled shoes that serve as her primary weapons when coupled with her Stand's ability.

Hato is the eldest daughter of Norisuke Higashikata IV and Kaato Higashikata and the second of their four children. She happens to have a jolly and somewhat air-headed temperament.

One of Hato's most obvious traits is that she is somewhat ignorant. For instance, she confesses that she thought that Hawaii was actually part of Japan,[Note 1] ruining a family vacation by forgetting to obtain a visa.[3] According to Kaato, Hato would also always misread the kanji for 'person' (人, hito/jin) as 'enter' (入, i) when she was younger.[5]

Hato is also proud of her beauty and is shown to be serious about her work. In preparation for a collaboration with the famous ice-skater Shizuka Arakawa

, she is shown taking great care in appearing proper but also worries that she could overshadow Arakawa with her beauty.[2] 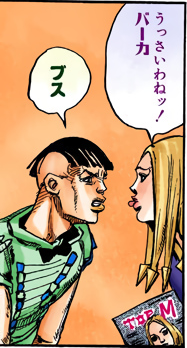 Hato and Joshu often argue with each other

For her age, Hato is still very playful and jolly, to the point she could appear childish. For instance, she entertains a playful sibling rivalry with younger brother Joshu, with the two of them insulting each other in good-spirited ways or playing pranks. Hato occasionally elongates certain syllables, much like her mother. She is also very enthusiastic about her boyfriend Tamaki Damo, whom she was seduced by not because of his looks, but because of his romantic behaviour. As a result, she ignored Damo's unusual (or ugly) appearance and still grew very intimate with him in a short period.[6] Even with the evidence of Damo's treachery, Hato also denied that he was evil for a sizable timeframe until he attacked her. Then, she was brought to tears as she had to kill her boyfriend to protect her family.[7] Her attitude also led to Damo underestimating her wits.

When her family is threatened, she reveals a more serious nature when she coldly and quietly helps to take down Damo to protect her family, not hesitating to use lethal force against her former boyfriend. Knowing that her mother Kaato committed murder, she's also one of the less welcoming family members toward her mother.

Unlike Joshu, Hato is religious and believes that cows and humans exist because God created them.[3]

Hato's Stand enables her to project long spikes from the heels on her feet, allowing her to pierce enemies from far away by using the spikes as missiles or using them on her feet to allow her to walk up walls. 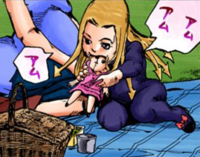 Hato as a child

Before the events of JoJolion, Hato and Jobin were the only two siblings old enough to know their mother, Kaato Higashikata. Hato was nine years old at the time Kaato disappeared, and their dad, Norisuke Higashikata IV, would tell them things like their mother left or she died. However, Hato checked up on the facts herself and discovered her mother was in prison for 15 years due to murdering a child.

At one point, Hato attended to the funeral of Rai Mamezuku's father.[8]

Josuke first encounter Hato in the Higashikata House where she picks up a dropped magazine titled "Top M" with herself displayed on the cover, revealing that she has the profession of being a fashion model.[1] For now, Hato has no relation to Josuke's search for his identity and doesn't interact much with him, being seen living her own life separate from Josuke's adventure. 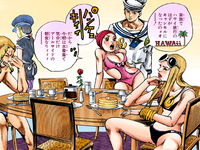 The Higashikatas having breakfast in swimsuits

One morning, she applies makeup in preparation for going ice skating with Shizuka Arakawa and worries that her 'aura' may cause her to stand out more than the figure skater. When Josuke borrows Joshu's razor and begins to shave his face bizarrely, Hato worries that he'll cut himself and bleed. However, Josuke's cheeks end up being completely clean, leaving Hato and her brother in a confused state. Josuke's bubbles moved his facial hair onto Hato and Joshu's faces, causing them to laugh hysterically when they look at each other's faces.[2] Josuke is confused when he enters the kitchen and sees Hato, Daiya, and Norisuke wearing swimsuits while eating pancakes. Daiya calls it the most tragic event in the history of the Higashikata Family. They had to cancel their trip to Hawaii because Hato didn't get passports for them to leave the country. She was ignorant of Hawaii being located in America because it has strong cultural ties to Japan, with both Pearl Harbor

being written with kanji. When Joshu argues about not believing in God, Hato states the cow that made the milk they were drinking and humans exist because God made them. After Josuke states he wants to go to school and is scorned by Joshu, Hato believes Josuke will do fine in school since she's a university graduate.[3] When Jobin arrived home from his trip, he brought souvenirs for his siblings and Kei. Hato received a t-shirt with an image of a red turtle on it and text saying "Green Turtle" in red letters above it. She also received a fold-up umbrella that has "Fighting Spirit" plastered over it in red letters. She's extremely amused about all the useless presents her and her siblings received and laughs to herself saying she wouldn't be caught dead walking around with the items.[9]

One day, Hato meets a peculiar man. During a photo shoot for a designer, the string of the designer's necklace she was wearing somehow snapped and the pieces scattered all over the floor. While the designer and the cameraman were fuming at her, Tamaki Damo showed up to deliver clean clothes for the photoshoot. He picked up every piece that had fallen off and rebuilt the entire necklace with a new design that has the characters for "I love you". Charmed, Hato became his girlfriend. In the short time they've known each other, they've had sex twice and bathed together five times.

Hato brings her boyfriend Damo at the Higashikata's

Hato brings Tamaki Damo to the Higashikata House with the intention of introducing her new boyfriend, who she calls "Kan-chan", to her family. Daiya is curious as to whether he's handsome while Josuke, Norisuke, and Joshu are at a loss for words due to his appearance. Joshu begins teasing Damo for speaking quietly, leading Hato to glare at him. When Norisuke asks how long they've known each other, Hato states they've only met recently and already had sex twice so far. Norisuke winces from the revelation, whereas Joshu can't hold back his laughter. When the couple starts showing affection and are about to kiss, Norisuke forbids it from occurring in his house. Hato then reveals that she's also bathed with Damo five times, bringing Norisuke greater distress. Hato describes the story of how she met her boyfriend and Joshu and Norisuke are disgusted as to how Hato could love him for something like that. 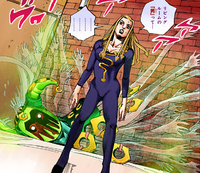 Hato realizes her family is under attack

When Yasuho faxes a copy of Josefumi Kujo's passport with a picture of Damo on it, Daiya picks it up and Hato is extremely curious as to what it shows. Daiya runs away with it to give it to Josuke but Damo convinces Hato to get it back from her so that he can be left alone with Norisuke. Hato discovers the handprints of Vitamin C all over the house and Josuke on the ground with his body melting. Josuke warns Hato that she'll be killed but she refuses to believe that Damo would betray her. Thus, she goes back to the living room only to see her father being tortured by her boyfriend. Damo immediately attacks her and sticks her liquefied body to the fireplace. Josuke manages to counterattack but Damo gets the upper hand and removes Josuke's liver. Just then, Hato emerges from a soap bubble from Soft & Wet, which Josuke wrapped her in so that she could escape from the range of Damo's Stand through the chimney. 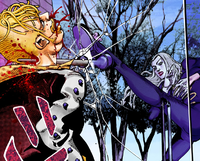 Hato kicks Damo from the outside of her house and the heel of her shoe impales his neck through the glass door, revealing that she is a Stand user. She kicks him through the door multiple times, with her heels continuously stabbing Damo. Damo attempts to act innocent by saying he was planning on turning her family back to normal and that he still loves her, but Hato responds by tearfully climbing up the bricks of her house using her heels and walks onto the roof. Thinking Hato was going to target him from above, Damo attempts to shove the liquefied Norisuke into the fireplace so that he burns alive, hoping Hato would touch Vitamin C's fingerprints in order to save her father. However, Josuke's bubbles reveal Damo's location, allowing Hato to swiftly fire her heel's spikes through the roof which pierces through Damo's skull. Once Josuke finishes him off as he tries running away, the family reverts to normal. Hato, Norisuke, Daiya, and Kei share a group hug after their traumatic experience.

One day, Kaato Higashikata, the family's matriarch, returns. On guard, Hato explains to Josuke that her mother is guilty of murdering a child. Hato does her best to keep away from Kaato and Kaato eventually storms out.[5]

One day, the Higashikatas have breakfast together. During the meal, Hato and Daiya eat the fish sausages that Joshu is attempting to weight. Soon after this, the entire estate is attacked. After Jobin plants Ozon Baby in the orchard, the air pressure of the estate is being modified. When Hato opens the door to the garage, the entire house is depressurized and Hato is among the casualties. Thankfully, Josuke eventually forces Poor Tom to cancel his power and the entire family survives. However, the orchard has been burned down during the fight and Hato worries about the family's livelihood.

Afterwards, Tsurugi's health deteriorates considerably and he is bedridden because of the Rock Disease. On the day of the harvest, a string of events result in the Higashikata Family catching Jobin and Mitsuba trying to drown Paisley Park. Hato is forced to see her family tearing itself apart as Norisuke exposes Jobin's murder of Ojiro Sasame and Jobin induces a heat stroke in Norisuke with Speed King. She is then told to help move the unconscious Norisuke to the second floor. Eventually, the family also realizes that Jobin is heavily wounded due to the attack of Akefu's Stand.

Later on, when Tooru infiltrates the Higashikata residence to retrieve the Locacaca plant from Yasuho, she is caught along Wonder of U's calamity along with Mitsuba, Tsurugi, and Daiya as the plane door meant to fly towards Yasuho lands inside the house.

Hato makes a cameo appearance in JoJo's Bizarre Adventure: Eyes of Heaven. She appears inside the Higashikata House on the Part 8 stage, sitting alongside Daiya and Jobin on the couch.