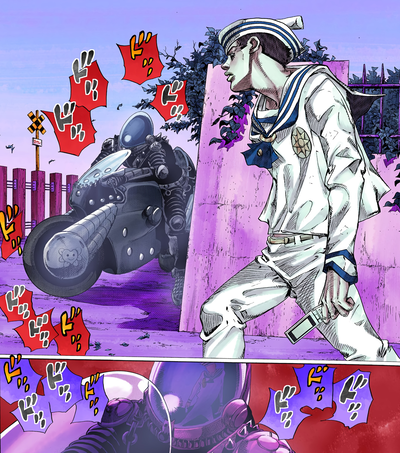 It narrates Josuke's misadventures, pursued by a biker Stand in the streets of Morioh, but aided by a mysterious GPS.

Utilizing his phone's GPS on the way, which seems to communicate contradictory instructions, Josuke is trailed and attacked by a dark motorcycle rider. Josuke manages to kick off the rider's helmet, revealing a Stand composed of both bike and rider. Josuke deduces that mysteriously, his GPS is actually helping him to escape his pursuer. Reaching the hospital, almost defeated, Josuke finds and defeats Kei Nijimura, the Higashikata family's maid as well as the motorcycle rider Stand's users.

Josuke asks Nijimura whether or not she attacked him under Norisuke's orders. She reacts with distaste and insists on killing him if he approaches Holy, who she reveals to be her mother.[1]

Kei claims that the Higashikata Family has a secret, and that she went undercover as their maid to find out what it was. Apparently, Holy and Kei are the only surviving members of the Kira family. Josuke interrupts her, saying that what she should be telling him is his identity, not hers. Kei responds that the current location is not suitable to give him an appropriate answer, and thus the two head toward the Wall Eyes.

Giving an example with a lemon and a tangerine buried in the ground, Kei explains that objects buried near the Wall Eyes fuse together and that Josuke is, in fact, the result of a fusion between Yoshikage Kira and someone else. Josuke asks who the person that fused with Kira was, and Kei infers that the Higashikata family has the answer.

Meanwhile, Yasuho briefly sees Josuke near the hospital, but is unable to contact him. A pain starts up in her leg, and she remembers having experienced it during her visit to the Wall Eyes. Looking quite ill, a nearby medical assistant helps Yasuho onto a stretcher without asking and takes her into the hospital.

The assistant eventually leaves her, and Yasuho notices that she is near where Holy is staying. She manages to listen in on a conversation between Holy and her doctors, and finds out that they've detected that parts of Holy's brain and vital organs are somehow missing, despite her denying having had any surgery. Because of this, her behavior seems normal, but she appears somewhat erratic and has a mania of treating people as things.[2]