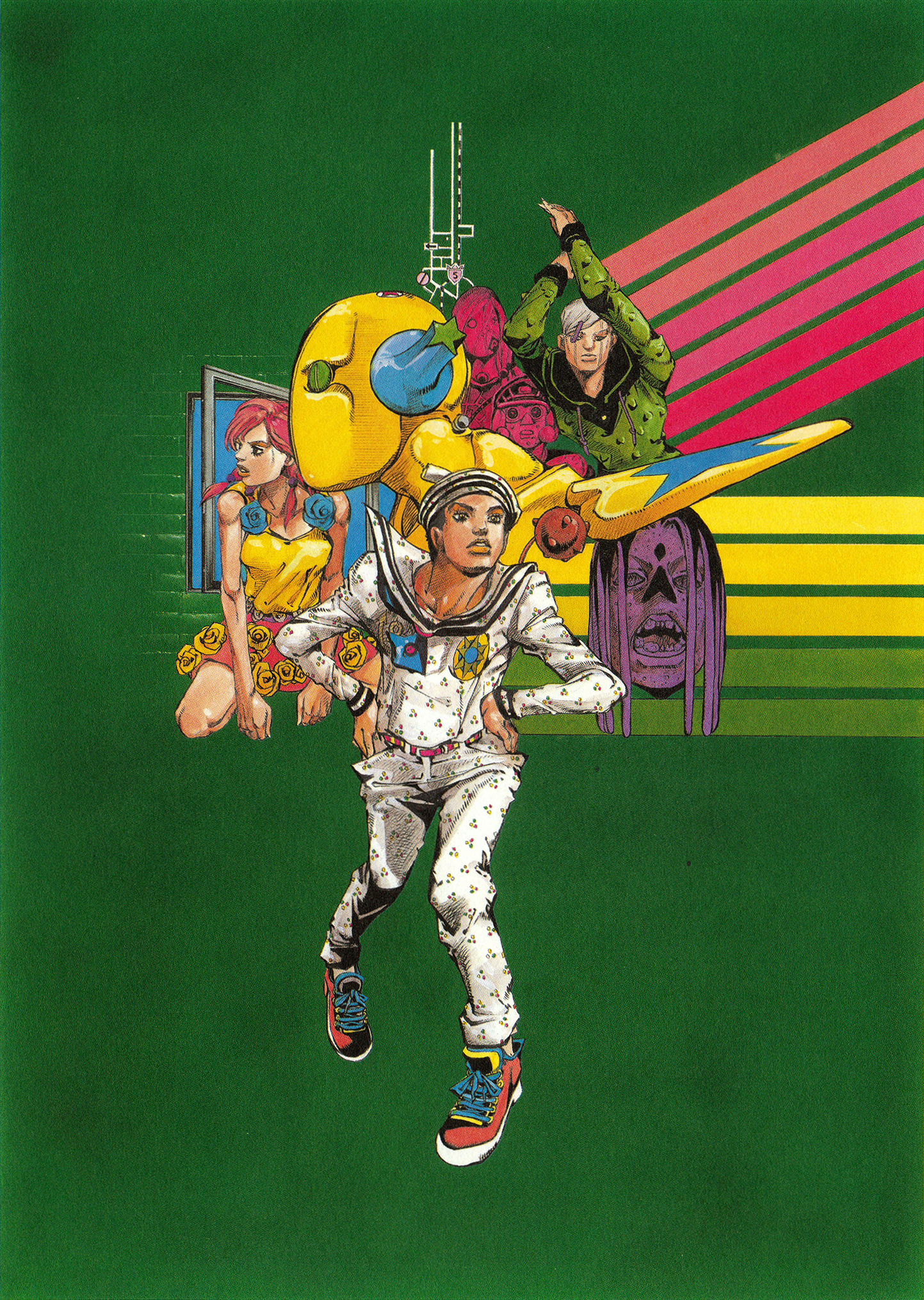 It narrates Josuke's struggle to escape from a Stand power which causes people to suddenly become extremely violent and pursue him across Morioh.

At the Higashikata House, Josuke and Norisuke discuss what they ought to do, hiding from the rest of the family under the pretense that Josuke wants to try out Norisuke's motorcycle. Josuke shows a footage of Jobin creeping in the garden, and suspects that he is in collusion with the Locacaca Smuggling Organization, exposing Jobin's possible use as a cover for their smuggling. Norisuke refuses to believe that his eldest may be conspiring behind him, but as Josuke needs to find the Locacaca for his own mother Holy and his own grandson Tsurugi's life is at stake, he cooperates further with Josuke. Norisuke tells him to go find a plant appraiser that only he knows of who will be able to find the branch.

Relaxing on a hammock in Norisuke's garden, Kaato Higashikata has been eavesdropping on them and after a brief fight with her ex-husband, Kaato calls Jobin and warns him that Josuke and Norisuke are planning to meet someone. Jobin thus heads to a pond near a shrine. In here he meets with a crippled Rock Human named Dolomite whom he convinces to use his Stand Blue Hawaii to attack Josuke.

Some time later, Josuke is given a letter by a courier boy. In the letter, there is a tooth, and the boy starts to act feral, pursuing straight in Josuke's direction even if it means bashing his head against obstacles. Although the boy is soon neutralized and comes to his senses, a mature woman who became involved soon turns feral too and pursues Josuke. Josuke sees that the boy has become conscious again and understands that the tooth is important in order to fight his enemy. The woman's attack are relentless, and Josuke, unable to touch her without being defeated, has to constantly flee. Pursued up to a scaffolding, Josuke gets almost bitten but Soft & Wet manages to bash the woman with a shovel and trap her inside a neighboring building. Josuke then tries to put as much distance between the infectee and him.

Josuke calls Yasuho for help, as she is the one person he completely trusts. He explains his situation and instructs Yasuho to go investigate the tooth back at Ryūshō Temple bus station and be sure to not touch it. Yasuho departs immediately to help Josuke. Josuke realizes that he is in the middle of the crowded commercial district where anyone could attack him. Sure enough, another infectee has come to attack him. Defending himself and fleeing when he can, Josuke successively repels one infectee after the other. However, without Yasuho, he will eventually be defeated.

Meanwhile, Yasuho has come to investigate the tooth, and has identified Dolomite as Masaji Dorokoma thanks to Paisley Park. However, before she can locate Dolomite, Jobin renders her unconscious, throws away the tooth, and breaks her mobile phone to stop her from helping Josuke. Although Yasuho wakes up, she has no way to find the enemy.

At the same time, Josuke keeps being pursued by a bird, a taxi driver then a fly. Realizing that the enemy Stand can control animals, Josuke must flee again and goes into a store to take a bug spray can and kill the fly, but although it died, the fly's corpse still pursues him. Josuke retreats into the bathroom, aiming to narrow the fly's angle of attack, but to his dismay, a baby has been infected and tries to crawl into the bathroom. Unwilling to harm a baby, Josuke lets himself get touched and becomes controlled by Blue Hawaii. Josuke mindlessly walks up to Dolomite's pond, where the Rock Human interrogates him about his goal and resorts to order him to drown himself at the bottom of the pond.

However, Yasuho who had been trailing Josuke, intervenes and bashes Dolomite with a metal bar. The limbless Dolomite cannot defend himself and when pushed into a mud pit, surrenders and reveals that it was Jobin who asked him to attack Josuke. Dolomite then comments that the two became involved with a dangerous business by approaching the Locacaca, all the more since a new species of the fruit has appeared.[1]