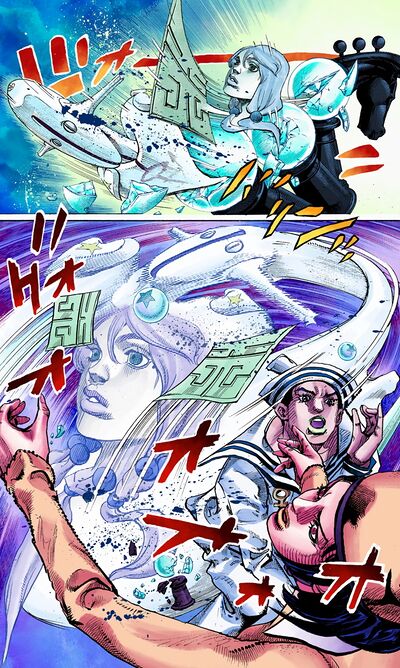 It narrates Josuke's struggle against Daiya Higashikata, who is smitten with him and gradually takes away the few memories he has.

Upon arriving at the house, Norisuke tells Josuke and Yasuho about his family business which is fruit trading, a business going back to his great grandfather, who won a second place prize in a horse race.

As Josuke and Yasuho enter the house, Joshu the second son, Hato the first daughter, Daiya the second daughter, Mitsuba the daughter in law, her son Tsurugi, and the maid Kei Nijimura are introduced and greet them.

Norisuke decides to take a commemorative photo, in which Josuke invites Yasuho and holds her hand. Jealous, Joshu comments that the eldest son Jobin isn't here, prompting Norisuke to cancel the photograph. Norisuke carries on by presenting the entire house to Josuke, leading to interactions with many of the Higashikata family members. However, the patriarch ominously commands him not to enter the upper room of the estate and to obey his every order. As a new member of the family, Josuke is assigned to take care of Daiya, who suffers from a visual impairment.

Yasuho is then seen off by the maid, who warns her not to approach the house again, or harm will befall her. Meanwhile, after Josuke helps Daiya make tea, she tells him to "act natural" and not fuss over her as she knows every nook and cranny of the estate. Josuke cannot help but assist her anyway. Daiya's Stand appears suddenly and a piece of Daiya's leg is mauled, much to Josuke's confusion.[1]

Having broken Daiya's rule to not fuss over her, Josuke is affected by Daiya's California King Bed, causing him to lose his memory of the mysterious square mark seen on Kira's corpse and the banister leading to Norisuke's study. Meanwhile, Yasuho returns to her home, where she unhappily discovers her mother drunk and asleep; before she notices and opens the results of a DNA test she commissioned on both Josuke and Kira; which gives the result that the two are "the same person", to within a small margin of error.

Josuke, told by Daiya the weakness of her Stand, silently turns off the switch to her closet in order to make her step on his shadow as cast from the other room. When he moves suspiciously, Daiya correctly accuses him, and moves towards the switch.

Josuke is caught for turning off the light; losing his memory of Yasuho. Daiya attempts to seduce him, and he begins to engage; when Norisuke walks in on the two and states that he will kill Josuke for taking advantage of his daughter, but not before making him a slave (also showing that he knows of her ability). Josuke unconsciously releases the sound of the light switch he had stored previously, alerting Daiya.

Josuke uses his Stand ability to open the fridge door without making any noise. He is able to lure Daiya to the fridge, and from there, steps on her shadow using the refrigerator light. Josuke finally defeats Daiya's stand and recovers his memories. He remembers the strange markings found on the stairway leading to Norisuke's study. He also remembers these same markings were found on Yoshikage Kira. With Daiya as his guide, they make their way up to the study.[2]