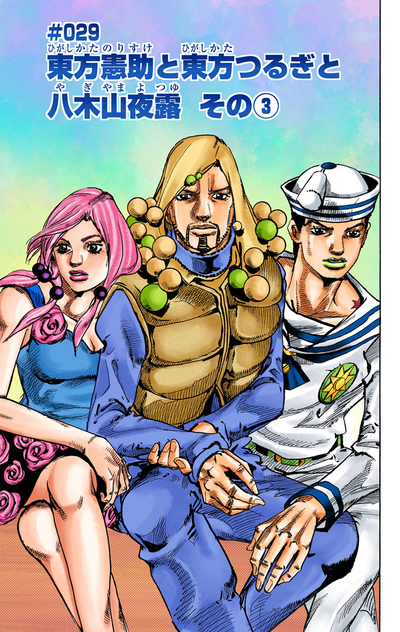 It narrates Josuke and Norisuke's battle against Yotsuyu Yagiyama, a man with a strange rock-like constitution.

Trapped again in the secret room below the Higashikata estate, Yasuho gives up on her escape. Tsurugi appears again, apologizing for the trouble he caused her. He explains the origin of Stands, his own Paper Moon King's ability, and a strange illness that affects the first child of each generation of the Higashikata family. Tsurugi finally leaves after making sure Yasuho is fine, and she falls asleep.

A strange man named Yotsuyu Yagiyama mysteriously appears within the secret room. Attempting to suffocate her with a sheet of film, Yotsuyu manages to draw out and examine Paisley Park, identifying it as a long-range Stand. Yotsuyu reveals that he is an architect and intends for Josuke to never retrieve his memories. Yasuho, in a last ditch attempt to free herself, manages to fold an origami bunch of bananas, which she successfully uses to trip the architect, as they are still powered by Tsurugi's Stand Paper Moon King. Yagiyama falls onto a piece of broken glass, and Yasuho breaks free in the confusion. However, by the time Yasuho is able to look around, Yotsuyu has already disappeared once more.[1]

In the morning, Josuke awakens in his bedroom and sees Tsurugi leaving from the back of the house, carrying bags full of food. Josuke asks Daiya what resides on the far side of the yard, and Daiya mentions the Wall Eyes, some woods, and the debris of a ruined shed. Norisuke asks Josuke about his experience at school, but Joshu interjects with a nonsensical, fictional account of the day, implied to be a result of damage inflicted by Yasuho by a large lump on his head.

From the balcony at the house's rear, Josuke identifies the shed, the pine, and the spring where he emerged, all lined up with the Wall Eyes. Spotting Tsurugi, he gives chase, resolving to interrogate each member of the family. Norisuke confronts Josuke, prompting him to say outright that he is following Tsurugi and finds the Higashikatas highly suspicious, wishing to ask them all certain things directly.

He settles to ask Norisuke whether he killed Yoshikage Kira, which he says he did not, and in three parts: First, that he knows of the power of the Wall Eyes to combine two objects, and argues that if he wished Kira dead, he should wish the same of Josuke. Second, that he is sympathetic to Kira's family, including Holy Joestar-Kira, being that theirs shares its fate with his, with respect to the curse of their disease; and third, that he actually needed Kira, believing that he had a clue as to their cure.

Norisuke says that he adopted Josuke in the hope that he has retained these memories; reaffirms his wish for his family's happiness, and that he does not know the identity of the other person composing Josuke, suggesting that he consider himself the individual currently searching for his identity.

Asking Norisuke, a firstborn, how he himself was cured, Norisuke limits his answer to that his parents traded their lives to cure him. Josuke asks Norisuke's permission to question Tsurugi, and the request encourages Norisuke to accompany him as a form of compromise.

On the way Josuke decides to inquire about the nature of Norisuke's Stand - even going as far as to ask if he can observe it after having deduced everyone in his family should possess one, and his awareness of Tsurugi's ability. Although he admits to being aware that Tsurugi possesses a Stand, Norisuke informs Josuke that he had no idea his grandson had attacked him and opts to momentarily reveal his Stand's hand in order to satisfy Josuke while keeping its full nature private.

Distracted, Norisuke notices the hatch to the basement open, describing the destroyed shed above it being designed a rest stop; and in the past, the basement below to store and research their fruit trees.

Moments later Josuke feels something touch his shoe and theorizes it to have been Tsurugi's accomplice Yotsuyu Yagiyama, although he cannot determine how he managed to sneak up on them without him noticing. These strange occurrences prompt him to warn Norisuke that something strange appears to be happening on the Higashikata property even its patriarch is unaware of, given the bizarre nature of Kira's death.

It is at that moment that an odd sound alerts them to the approach of heavy, rolling pots which appear to be converging on their location from all directions. They are in such great numbers that the duo assume them to be from all over Morioh and wonder if this is the affect of their enemy's Stand.

Breaking the pots with Soft & Wet proves ineffective when the shards begin to dig into Josuke's flesh, ever gravitating towards his 'core'. It is only through the combined effort of a now free Norisuke dragging him out of the Pot's reach and Josuke utilizing soap bubbles to steal the weight of the shards attached to him does he escape death.

The two take this brief moment to plan their next move; either progress towards the hatch and risk a trap or flee and abandon the unconscious Yasuho which Josuke refuses to do. While analyzing the enemy's Stand Josuke and Norisuke both feel the sensation of being touched again, and just as before cannot pinpoint the location of the culprit.

This time hundreds of chestnuts advance on the pair and threaten to pierce their skin with sharp pines until Josuke robs them of their moisture and cause them to collapse, giving Norisuke enough time to force the hatch open and break the chained inner handle with a rock. Once the two enter and seal the bunker they find themselves out of their opponent's effective radius and indulge in a temporary calm.[2]

Josuke finds Yasuho asleep in the room Tsurugi left her in. Tsurugi tells Josuke that room belongs to Yagiyama, who Norisuke hired to design the Higashikata House. Tsurugi tells the two that he asked Yotsuyu to heal him after seeing him heal a sick dog, and that he agreed on the condition that Josuke is delivered to him.

King Nothing begins to turn around and starts walking towards the duo, causing them to start searching around their immediate location. Josuke finds Yasuho stashed behind a rock and as he reaches out to her is attacked by Yagiyama formed into a rock. Josuke knocks him away into a rock quarry, stating that Yagiyama is a person made out of living stone.[3]