Urban Guerrilla and Doremifasolati Do 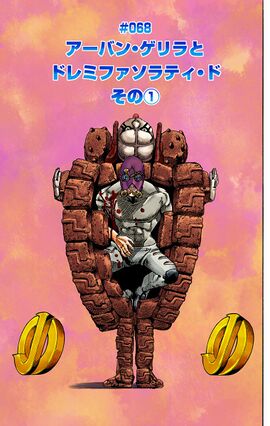 Josuke, Mamezuku and Yasuho witness the two enemies emerging from the soil: the Rock Human Urban Guerrilla sheltered inside his pet Doremifasolati Do. Furious after being stabbed, Urban violently threatens Mamezuku, only for the latter to stab him again and force the duo to retreat underground.

The cable car on the verge of falling apart, Mamezuku tells Josuke to protect him so he can reach the 7th pole and use the fuel stored inside to light the enemy on fire. However, Josuke is more preoccupied by Yasuho's safety and jumps down to protect her despite Mamezuku's insistance that he be protected first. Mamezuku chooses to swing to his objective along the cable, while Josuke and Yasuho are pursued by Doremifasolati Do. Josuke tries to attack the Rock Animal with Soft & Wet's bubbles, but they are somehow teleported immediately behind Doremifasolati Do. His attacks being uneffective, Josuke must flee alongside Yasuho to a bedrock area. Meanwhile, Urban Guerrilla has climbed up the cable car poles and attacks Mamezuku with his Brain Storm.

A short explanation of Brain Storm is made. The trio of protagonists is currently in dire straits, facing opponents more powerful than they are. Urban thus takes the time to gloat about the superiority of Rock Humans. Despite his growing injuries, Mamezuku manages to shoot one fork into Urban's face, but his second shot misses and only pierces the fuel storage. The plant appraiser finally collapses to the ground. Josuke initially worries about Mamezuku, but he then sees a determined look telling him that the plant appraiser has a plan. Thus Josuke confidently jumps from the bedrock and runs to attack Urban, Doremifasolati Do on his trail. Despite his efforts, Urban manages to jump inside his pet again and Josuke is vulnerable.

Doremifasolati Do crushes Josuke under him, and is now being decomposed by Brain Storm. Again in a position of strength, Urban gloats and looks forward to using the new Locacaca. To distract Urban, Josuke manages to guess a little of Urban's identity, angering the latter. It buys enough time for Mamezuku to use his power to drench himself in fuel, which has been leaking since the fork pierced the fuel storage, and bring it close to Josuke in addition to a lighter. Although Urban understands their plan and buries himself underground while closing Doremifasolati Do's shell, Josuke's bubble containing fuel and fire slip between the scales and pop. An explosion ensues, Urban dies burned alive while the pressure destroys Doremifasolati Do.

The fight won, Mamezuku announces that he's already seen from Josuke's photos where the Locacaca branch is and reveals in the 8th pole several vivariums containing moth larvae which can make the branch grow more fruits before winter. Meanwhile, Jobin meets with Urban's superior within their mysterious organization, the child-like yet mature Poor Tom. Predicting the Urban's lack of report means that he's dead, Poor Tom tells Jobin to go bury his Stand Ozon Baby in the Higashikata orchard to seal the area.